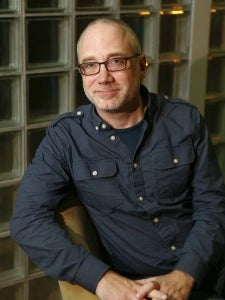 Officially, I teach writing, but I'm most interested in helping students hone the critical thinking skills they'll need in the world beyond college. In my class, we do this through the writing of essays of all sorts, research papers, and personal responses. Effective writing is hard won by working through a series of steps. Beyond that, it is the student’s job to challenge his own sense of self as a writer. Your primary task (at least at first) is to interest the reader in what you are writing about. Try choosing the least traveled path, or the least voiced opinion on a subject. Be outrageous, be passionate, be angry, or be euphoric, but BE something. And, above all, make your writing worth reading! How to do this is what my classes are all about.

Awards, Grants and other Scholarly Recognitions

I began teaching at Delaware County Community College in 1992 as an adjunct instructor. I've been a full-time faculty member since 2002, earned tenure in 2007, and was presented with the Gould Award for Teaching Excellence in 2010. During that time, I have served the college on the Tenure, Emerita, Gould Award, Professional Development (Co-chair), Safe Spaces, and Middle States Accreditation and Planning Committees (co-chair), among others. Beyond my work at the college, I am an award-winning playwright and author of young adult non-fiction. My plays have been performed across the country and abroad, and I have received two fellowships and three grants from the Delaware Division of the Arts. In 2017, I was voted Delaware's Best Playwright by Broadway World.