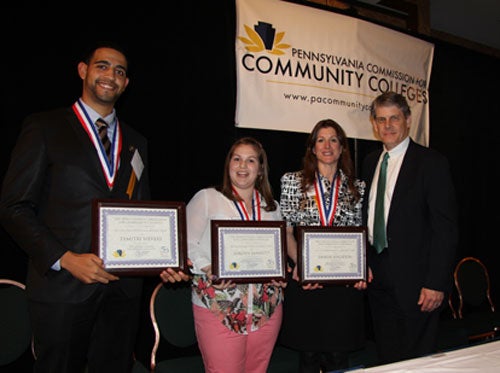 (Delaware and Chester Counties, PA, April 9, 2013)—Three students at Delaware County Community College were recognized last night by the Phi Theta Kappa international honor society of two-year colleges and the Pennsylvania Commission for Community Colleges for their academic achievements and their volunteerism in the community. The students were Jordyn Bennett of Coatesville, Denise Logsdon of Chadds Ford and Dimitri Wevers of Sharon Hill.

The three students were among 45 scholars from Pennsylvania’s 14 community colleges to be honored at the Commission’s annual banquet held at the Hilton Harrisburg Hotel. The scholars also were named to the All-Pennsylvania Academic Team, which requires students to maintain at least a 3.5 GPA and be eligible to graduate with an associate’s degree.

Jordyn Bennett, 21, is pursuing an Associate of Arts degree and wants to transfer to a four-year school to study nutrition and dietetics. She one day hopes to become a Registered Dietician. Despite attending school full-time at the College’s Downingtown Campus and Exton Center, Bennett finds time to advocate for people to donate blood to the American Red Cross. She also works part-time. Bennett’s former English professor described her as quick to offer help to classmates and a strong writer who displays a “genuine concern for building intellectual community on our campus outside of class.”

Denise R. Logsdon, 45, is pursuing an Associate of Science degree and plans to transfer to the University of Pennsylvania, where she will study Human Rights and Social Justice. She hopes to one day pursue her Doctorate degree in Justice, Law and Policy and become a human rights advocate and policy scholar. A mother of four children, Logsdon has found time to juggle the responsibilities of parenting with academic excellence and social involvement. A student at the Marple Campus, she is the president of the College’s Student Government Association; Phi Theta Kappa vice president of public relations; chair of the College’s Thanksgiving Food Drive to benefit local homeless shelters; co-chair of the Hurricane Sandy Relief Drive; chair of the Campus’ Thirst Project, which helps build wells for clean drinking water in sub-Sahara Africa; and chair of the Adopt-a-Highway program. She also founded and spoke at the College’s first International Peace Day and jumpstarted the College’s new Global Studies programs, bolstering the College’s study abroad opportunities. An instructor at the College described Logsdon as persistent, showing initiative and leading through service. “Denise pours herself into major projects designed to serve fellow human beings,” the instructor said. Another teacher described Logsdon as having “relentless drive, focus and natural insight and intelligence.”

Dimitri Wevers, 22, is pursuing an Associate of Science degree and plans to transfer to a four-year school, where he wants to major in Business Administration. He hopes to pursue his master’s degree and become a financial analyst. A native of Belgium, whose family emigrated to Belgium from Haiti, Wevers is a Business Administration major who worked part-time for two years while attending school. He was awarded the Phi Theta Kappa’s Alpha Tau Epsilon chapter’s distinguished member award this year and he has participated in the LUNGevity Foundation’s Breathe Deep Philadelphia lung cancer walk in Philadelphia and the College’s Thanksgiving Food Drive. He also shared his global experiences with students at the College’s multi-cultural festival, answering questions and sharing about living and having studied in Belgium. One of Wevers’ instructors described him as having a “wonderful sense of academic motivation.” Another instructor said he is “always willing to help other students when needed.”

Photo Caption: Delaware County Community College students, from left, Dimitri Wevers, Jordyn Bennett and Denise Logsdon are congratulated by College President Dr. Jerry Parker. They were among 45 students from throughout the state honored for their academic achievement and community service by the international Phi Theta Kappa honor society and the Pennsylvania Commission for Community Colleges at an awards banquet on April 8 at the Hilton Harrisburg Hotel.
Contact: Anthony Twyman, Assistant to the President for Communications, 610-325-2816, [email protected]