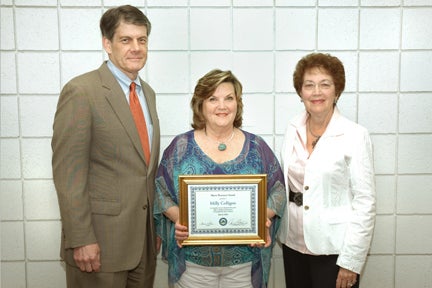 (Delaware and Chester Counties, PA, June 12, 2012)—Milly Colligon, of West Chester, is this year’s recipient of Delaware County Community College’s Marie Patriarca Award. Since 1992, Colligon, a publications and graphic design specialist, has continually demonstrated excellence in performing her job duties and has helped to create a positive, collaborative work environment at the College.

“No job is too small or too large to merit her undivided attention... Milly spends countless hours reviewing and is determined that each publication and graphic piece exhibits excellence,” says one colleague.

“Milly is a priceless source of information about the College, the staff and faculty,” says another. “She is accommodating to all employee requests and all our clients, no matter what their rank in the organization. As a worthy successor to Marie Patriarca’s legacy, there could be no one more deserving than Milly.”

Established by Labron Shuman, Professor of Administration of Justice, the Marie Patriarca Award is presented annually to a support staff member who exhibits excellence in the performance of his or her duties and demonstrates high standards of personal conduct. Shuman established the award to honor Marie Patriarca, who retired in 2003 after dedicating 25 years of service to the College both as secretary to the President and assistant secretary to the Board of Trustees.

Photo Caption: President Jerry Parker (L) and Marie Patriarca (R) congratulate Milly Colligon (C) on receiving the 2012 Marie Patriarca Award for demonstrating the highest standards of performance in her work for the College.