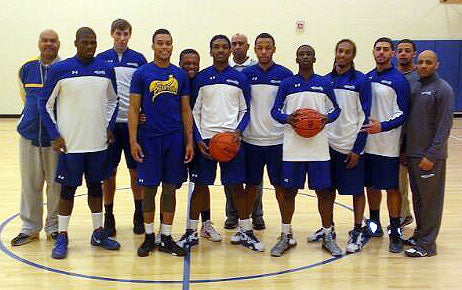 (Delaware and Chester Counties, PA, Feb. 12, 2013)— Delaware County Community College’s men’s basketball team is back in the postseason for the third year in a row. The Phantoms earned a #2 seed in the Region 19 tournament and will host a quarterfinal playoff game at 5 p.m. on Monday, February 25, at Widener University’s Schwartz Athletic Center (One University Place, Chester, PA). The Phantoms’ final record is 15-11 and they are 12-2 in the conference.

No strangers to winning, the Phantoms scored last year’s league champions while playing in the Eastern Pennsylvania Collegiate Conference. This year, they joined the National Junior College Athletics Association where they’ve faced tougher competition. Despite this, the team has played another successful season.

“We set high standards for our program and players so we expect to make the postseason and strive to win the championship every year,” says third-year head coach Dwayne “Redz” Saunders. “The playoffs also provide an important opportunity for our sophomore student-athletes to showcase their skills in front of four-year college coaches.”

"It feels great to make the postseason for the second time in my college career,” says returning player Carl McKenzie of Swarthmore. “It's on another level in regards to the atmosphere and intensity level. It’s like fighting for your life knowing in the back of your mind if we lose we go home. Nobody wants to go home."

In addition to McKenize, the Phantoms only have one other returning player from last year’s historic team. Three of last year’s team members are now competing at four-year schools with Zak Thomas at Neumann University, Justin Wright at Mid-Continent University, and Rashid Hines playing for Widener University.

Coaching a new group of guys required Saunders to quickly rebuild a competitive team. For him, preparation always begins in the offseason by investing in professional development opportunities, including coaching clinics and leadership seminars, while also working with mentors who have been around the game for a long time.  “We tell our new recruits that champions and leaders are made in the offseason, not during the season. I believe developing them mentally in the summertime helps them buy into our system from the minute they step on campus.”

This season’s standout newcomers include freshman Tayqwane Wallace of Wilmington, Del., who is currently eighth in the country in scoring at 22.7 points per game. Another freshman, Chester resident Malcolm Nunn has also made valuable contributions to the team, averaging 13 points and six rebounds per game. This season has also marked a personal milestone for Saunders when he reached the 50-win mark in a matchup against Lehigh Carbon Community College on January 26. His current career record stands at 55-21.

The game is free to Delaware County Community College students and staff with an ID. For others, admission is $3 for adults and $1 for children. For more information, contact Andrew Johnson, Director of Athletics, at 610-359-5047 or visit www.dccc.edu/athletics.