(Delaware and Chester Counties, PA • April 19, 2016)—Students Sameena Elkhashab of Broomall and Katie Thompson of Honey Brook were recognized by the Phi Theta Kappa honor society of two-year colleges and the Pennsylvania Commission for Community Colleges for their academic achievement and community volunteerism.

Elkhashab and Thompson were among 45 scholars from Pennsylvania’s 14 community colleges honored on April 4 at the Pennsylvania Commission for Community Colleges’ annual banquet at the Hilton Harrisburg hotel in Harrisburg. The scholars were named by their colleges to the All-Pennsylvania Academic Team, which requires students maintain at least a 3.5 grade point average and be about to graduate with an associate’s degree.

All-Pennsylvania scholars are eligible to receive a full-tuition scholarship for up to two years at one of the 14 universities in the Pennsylvania State System of Higher Education (PASSHE). 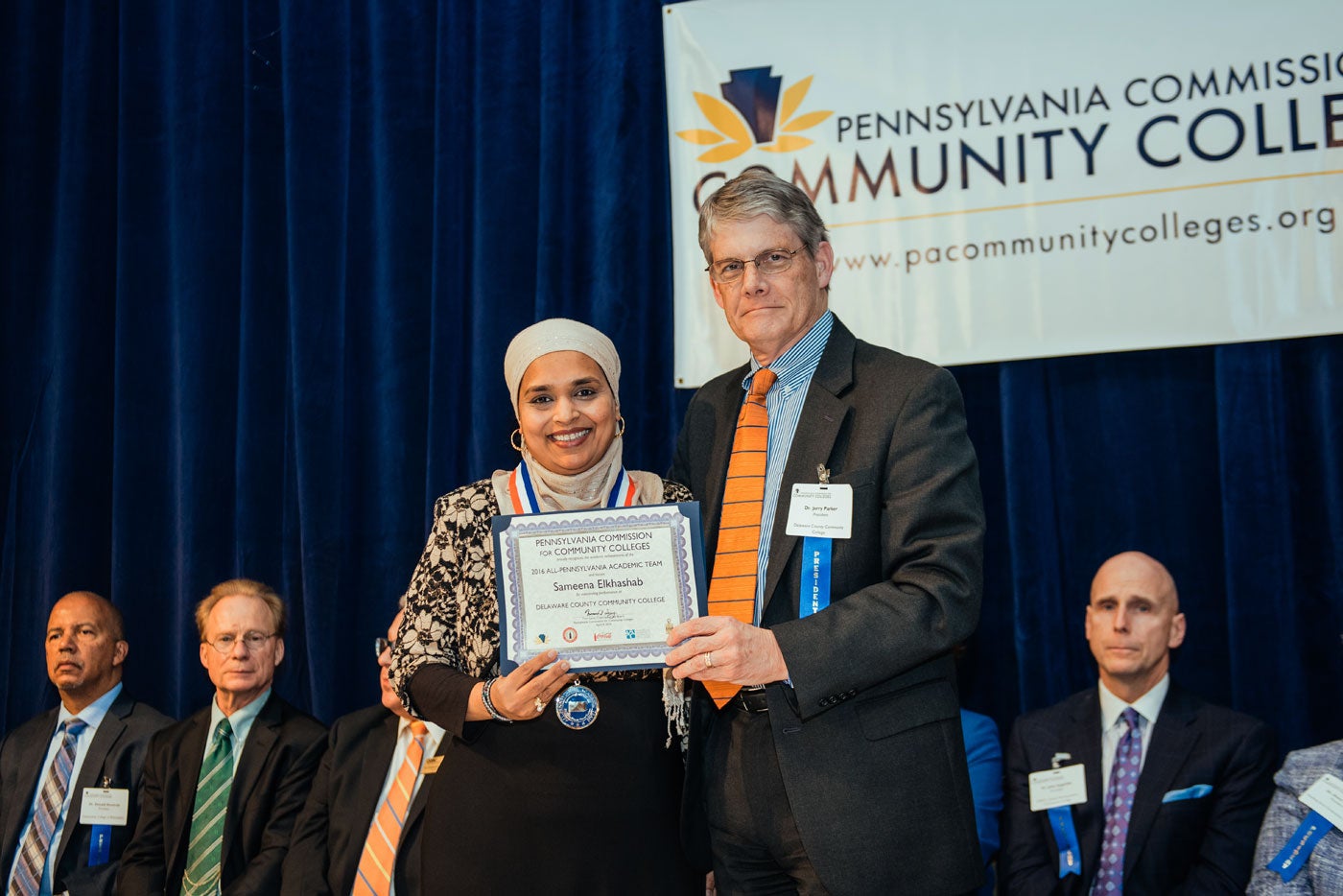 While attending the College, Elkhashab learned self-confidence and not to fear looking people in the eyes when she talks to them, something which she said is considered taboo for many women in her native India.

“I am from India. Even though I was raised here, I was still taught the traditions of India, where mostly everything is kept quiet and women have to endure bad, abusive relationships,” Elkhashab said. “I want all people, whether foreign or not, who are in tough situations to come to me for help. I want to be the guiding light for them. I want them to know they are not alone in this situation, that even if their culture and traditions are different than those of the western world, they don’t have to live in a bad situation. That there is help out there and I can guide them to it.”

Elkhashab has a 3.8 grade point average and works full-time as a teacher’s assistant with special needs students at the Overbrook School for the Blind in Philadelphia. She also volunteers for the nonprofit Zubaida Foundation’s soup kitchen in Yardley and at the Zakat Foundation of America (a U.S.-based, Muslim-run, international charity), contributing and distributing school supplies and coats to children and adults in need. 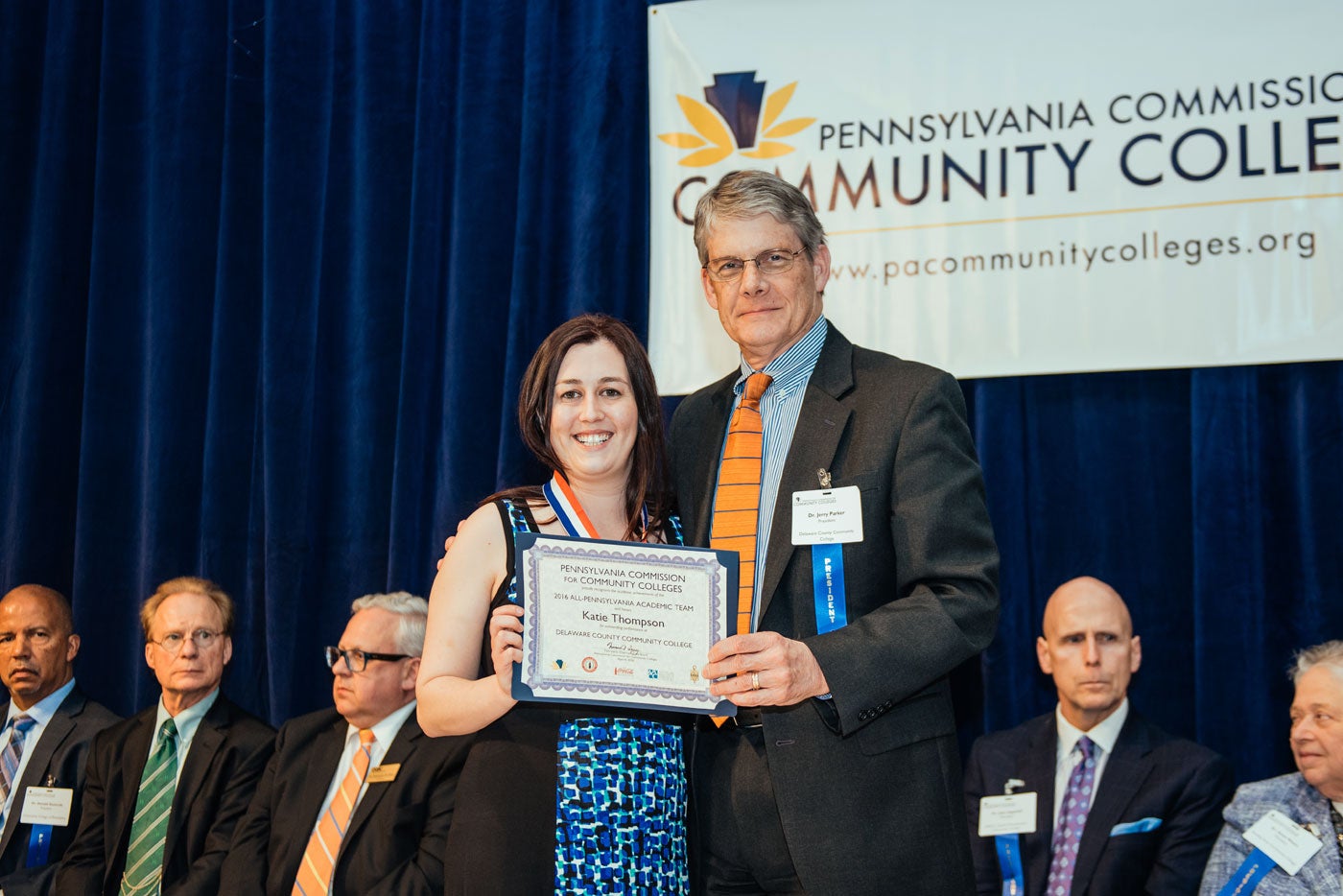 Katie Thompson of Honey Brook in Chester County
Nearly a decade ago, Thompson dropped out of Kutztown University and joined the U.S. Marine Corps, where she learned self-confidence, the importance of persistence and how to be a leader. After her discharge from the Marines, she made the decision to enroll at the College after repeatedly passing a sign outside the College’s Downingtown Campus that said, “It’s never too late to earn your degree.” That sign convinced her that, even though she had been out of school for many years, she needed to go back and earn a degree.
Today, Thompson has a 3.81 grade point average, works part-time as a dog trainer, is a salesperson at PetValu, and is active in a variety of activities both on and off campus. She is vice president of fellowship for the College’s Phi Theta Kappa honor society chapter, working each year to arrange the honor society’s induction ceremony for new students. She is vice president for membership for the College’s Women in STEM (Science, Technology, Engineering and Mathematics), and she is treasurer of the College’s Modern Environmental Sustainability Association. She also volunteers to help feed, shelter and find homes for orphaned dogs and cats.
An avowed animal lover who has two dogs and two cats, Thompson plans on transferring to a four-year college to study environmental science. She eventually plans on earning a Master’s degree in science toward her ultimate goal of becoming a restoration ecologist, working to restore the natural environment to areas destroyed by human pollution, waste, mismanagement and neglect.

About Phi Theta Kappa
Phi Theta Kappa Honor Society, headquartered in Jackson, Mississippi, is the largest honor society in American higher education with more than 1,285 chapters on two-year and community college campuses in all 50 of the United States, Canada, Germany, Peru, the Republic of Palau, the Republic of the Marshall Islands, the Federated States of Micronesia, the British Virgin Islands, the United Arab Emirates and U.S. territorial possessions. More than 3 million students have been inducted since its founding in 1918, with approximately 134,000 students inducted annually.