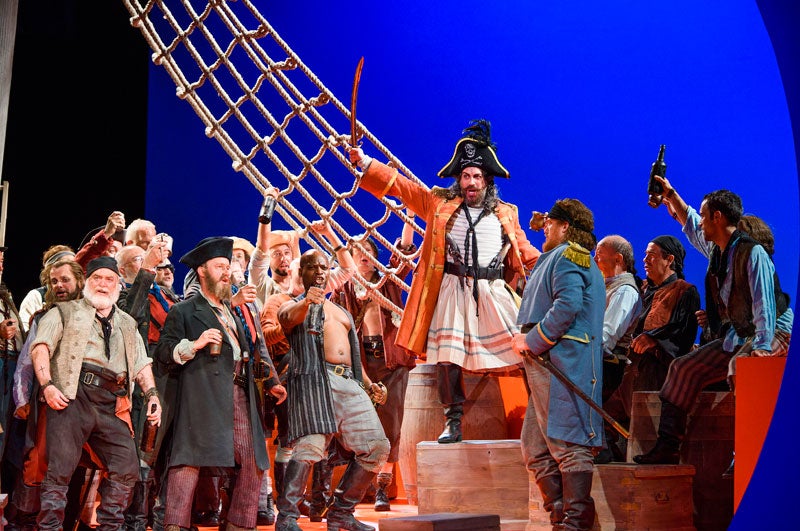 (Delaware and Chester Counties, PA • September 9, 2015)—Delaware County Community College’s SpectiCast series begins its season with an HD film screening of The Pirates of Penzance on Sunday, September 27 at 2 p.m. in the Large Auditorium in the Academic Building on the Marple Campus (901 S. Media Line Road, Media, PA).

Sentimental pirates, blundering policeman, absurd adventures and improbable paradoxes—Gilbert and Sullivan’s dazzling The Pirates of Penzance comes to the English National Opera in a highly anticipated new production from renowned filmmaker and director Mike Leigh. This much-loved comic opera is a showcase of brilliant humor and razor-sharp wit and features a sparkling score chockfull of memorable melodies and catchy tunes.  Run time: 2 hours and 29 minutes with an intermission.

Now in its sixth year, the College’s SpectiCast series brings the classical realm of music, dance and opera closer to home for residents of Delaware and Chester Counties. Each performance is produced using a state-of-the-art audiovisual system and is choreographed to capture the fullness of the orchestral performance and the intimacy of the on-stage experience. Performances are filmed live in some of the greatest venues around the world and then broadcast at the College.

This year features new lower prices. Admission is $15 for adults, $12 for seniors (50 and older) and $7 for students (with an ID) and children (13 and under). Tickets are available for purchase online and at the door 45 minutes prior to the show. For more information, please call 610-359-5266.