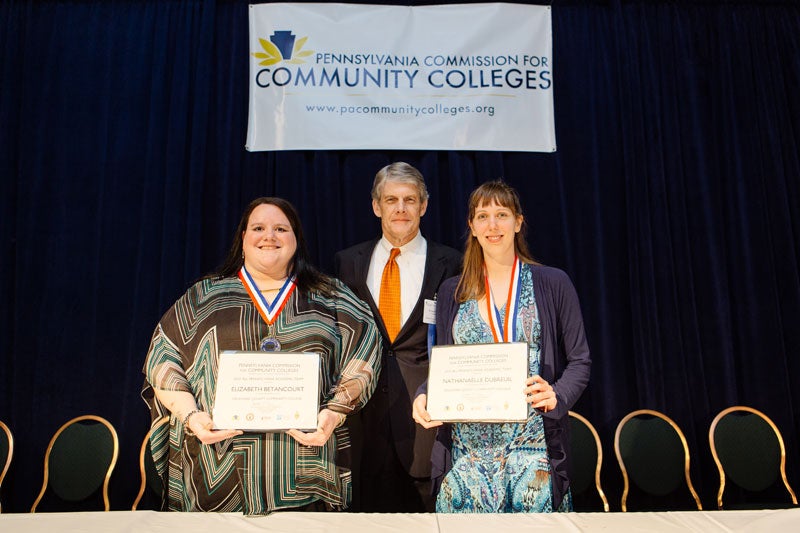 Betancourt and Dubreuil were among 44 scholars from Pennsylvania’s 14 community colleges honored on April 13 at the Pennsylvania Commission for Community Colleges’ annual banquet at the Hilton Harrisburg hotel in Harrisburg, PA. The scholars were named to the All-Pennsylvania Academic Team, which requires students maintain at least a 3.5 grade point average and be about to graduate with an associate’s degree.

All-Pennsylvania scholars are eligible to receive a full-tuition scholarship for up to two years at one of the 14 universities in the Pennsylvania State System of Higher Education (PASSHE). Twenty nine of this year’s team members intend to transfer to PASSHE institutions, and 35 of them intend to pursue postgraduate education.

Elizabeth Betancourt, 34, of Clifton Heights has a 3.92 GPA, majors in Administration of Justice and will earn an Associate in Arts degree from the College in May at Commencement. Betancourt plans to transfer to West Chester University in September to study Criminal Justice. Her long-term goal is to earn a master’s degree and become a juvenile probation officer.

A manager at one of SEPTA’s Regional Rail stations, Betancourt successfully juggles her studies and volunteer activities. At the College, Betancourt is the vice president of scholarship for the Alpha Tau Epsilon chapter of Phi Theta Kappa, which involves teaching and guiding fellow students through the often challenging task of applying for scholarships and attaining their academic goals. Last year, she organized two scholarship seminars for fellow students. Also, last year, she and other members of Phi Theta Kappa set up tables around the College’s Marple Campus and asked students to sign a pledge that they would not drop out of school, but complete their studies. More than 600 students signed the pledge, which was part of a Phi Theta Kappa national initiative known as the Community College Completion Corps.

Betancourt also volunteered in the community at a local church, served Thanksgiving Day meals at the Ronald McDonald House for children, and participated in the annual Autism Speaks Walk, in which she and other students from the College raised more than $2,000 in pledges. "I love helping people, whether it is through a personal issue, a school project or paper, or maximizing their chances for continued education," she says.

Nathanaëlle Dubreuil, 28, of Havertown has a 4.0 GPA, majors in Mathematics/Natural Science and will earn an Associate in Science degree in May. Dubreuil plans to transfer to East Stroudsburg University where she will major in biochemistry. After earning her bachelor’s degree, she plans to earn a master’s degree and a Ph.D. in biochemistry and then conduct research and teach college-level biochemistry. “I want to help students develop trust in their ability to learn,” she says.

A native of Montreal, Canada, Dubreuil’s first language is French. She learned to speak English about a decade ago. At the College, Dubreuil is a statistics tutor and is secretary for the Alpha Tau Epsilon chapter of Phi Theta Kappa. Aside from her studies, Dubreuil works from home as an English-to-French translator for a plumbing company based in Canada. Stores like Home Depot Canada use her translations on their websites. She also is a volunteer volleyball coach, and hosts clinics at the Greater Plymouth Community Center, teaching beginners.

Dubreuil also volunteered in the dietetics department at Bryn Mawr Hospital, volunteered with Meals on Wheels in Bryn Mawr, helped to run a Hope for Kids volleyball tournament in Plymouth Meeting, and facilitated a fundraiser for Autism Speaks at the Busy Bees Potter & Arts Studio, in which children with Autism Spectrum Disorder participated. Because several people in her family suffer from diabetes and digestive disorders, such as celiac disease, she also created a gluten-free blog with more than 50 recipes, including pictures, health advice and shopping tips (glutenfreequest.wordpress.com). She also once worked in the Dominican Republic as an "apprentice biologist" explaining the behaviors of humpback whales to tourists.

About Phi Theta Kappa
Phi Theta Kappa Honor Society, headquartered in Jackson, Mississippi, is the largest honor society in American higher education with more than 1,285 chapters on two-year and community college campuses in all 50 of the United States, Canada, Germany, Peru, the Republic of Palau, the Republic of the Marshall Islands, the Federated States of Micronesia, the British Virgin Islands, the United Arab Emirates and U.S. territorial possessions. More than 3 million students have been inducted since its founding in 1918, with approximately 134,000 students inducted annually.