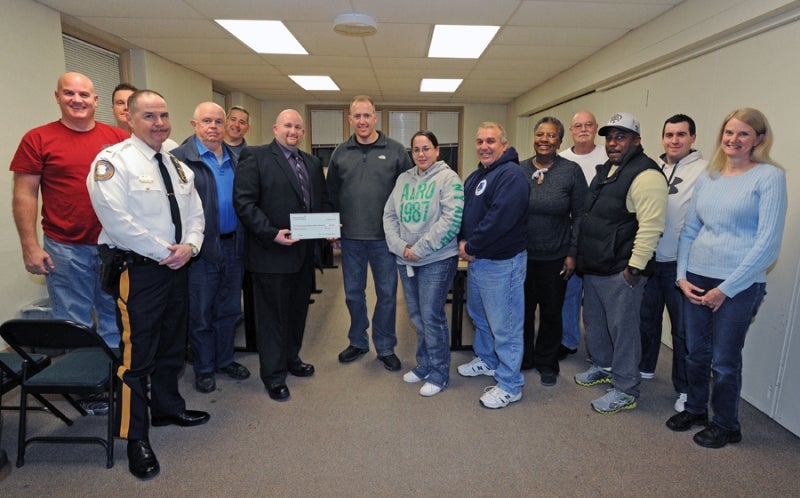 (Delaware and Chester Counties, PA • November 18, 2014)—Delaware County Community College recently donated a $2,500 check to the Delaware County Law Enforcement Memorial Foundation as a way of thanking law enforcement and emergency response personnel who were involved in an emergency preparedness exercise held at the College’s Marple Campus in July.

Matt Brenner, the College’s assistant director of Safety and Security, presented the check to leaders and members of the Delaware County Law Enforcement Memorial Foundation at the Foundation’s meeting on November 5 at Springfield Township Police Headquarters (Brenner is holding the check in the photo).

After much planning, the College and the Marple Police Department, in conjunction with many other local law enforcement, fire and emergency management agencies, held an emergency preparedness drill on July 25 that included a simulated active shooter and hostage situation at the College’s Marple Campus.

More than 100 law enforcement and emergency responders were involved in the exercise, including the Marple, Newtown Township, Upper Providence, Springfield, and Media Police Departments, as well as other agencies. The Broomall Fire Department, County Special Weapons and Tactics (SWAT) teams, and Emergency Medical Technicians from a variety of area townships also participated in the drill.

The exercise was one of many measures the College has taken to ensure the safety of its students, administrators, staff and visitors. Cadets from the College’s Municipal Police Academy played the role of college students during the drill, which included several simulated casualties. Several interns from West Chester University also participated in various emergency management roles.