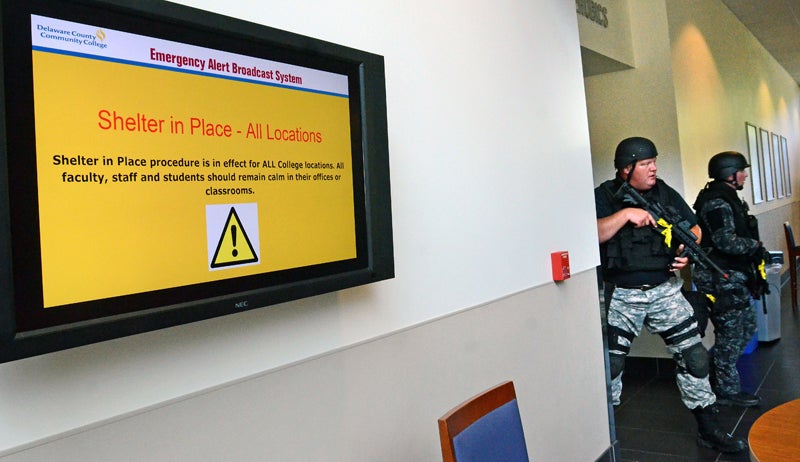 (Delaware and Chester Counties, PA • July 28, 2014) — After much planning, the College and the Marple Police Department, in conjunction with many other local law enforcement, fire and emergency management agencies, held an emergency preparedness exercise on Friday.

The exercise, which included a simulated active shooter and hostage situation at the College’s Marple Campus, is the latest initiative taken by the College to ensure the safety of its students, administrators, staff and visitors. Cadets from the College’s Municipal Police Academy played the role of college students during the drill, which included several simulated casualties and wounded victims. Several interns from West Chester University also participated in various emergency management roles.

"We want to be as prepared as possible in the event of an occurrence," said President Dr. Jerry Parker. "Our sincere thanks to the Marple Police Department and other law enforcement and emergency preparedness agencies that helped the College conduct this safety drill."

Approximately 100 law enforcement and emergency responders were involved in today’s exercise including the Marple, Newtown Township, Upper Providence, Springfield, and Media Police Departments, as well as other law enforcement agencies. The Broomall Fire Department, County Special Weapons and Tactics (SWAT) teams, and Emergency Medical Technicians from a variety of area townships also participated in the drill.

Contact: Anthony Twyman, Assistant to the President for Communications, 610-325-2816