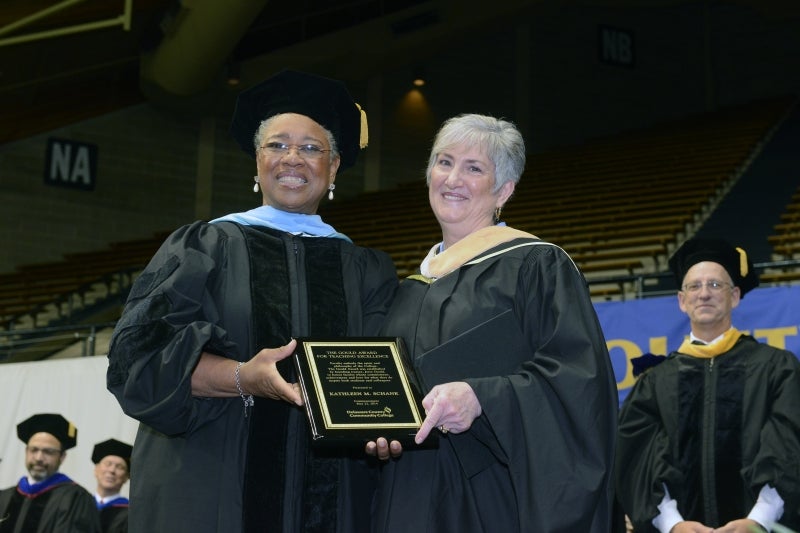 (Delaware and Chester Counties, PA • July 10, 2014)—On the 20th anniversary of her graduation from Delaware County Community College, Kathleen Schank of Havertown, an assistant professor of Behavioral Science, has made history. Schank is the first person at the College to win both “The Lindback Distinguished Teaching Award,” a coveted regional award, and the College’s Gould Award for outstanding teaching, in the same year. She also became a tenured professor at the College in January.

“Teachers like Kathleen Schank are the lifeblood of Delaware County Community College and are what makes this College a special place for students, faculty and staff,” said College President Dr. Jerry Parker.

While she was a student at the College, Schank, a licensed clinical social worker, used to write down the names of Gould Award winners and try to take the classes they taught. Now, her name is among those on the Gould Award winners’ plaque at the College. “There wasn’t even a clue in my brain that I would ever be able to teach as a faculty member,” Schank said, recalling her progression from student to teacher.

After graduating from high school, Schank enrolled at Saint Joseph’s University, where she took classes part-time, while working during the day. But her lack of focus at that time resulted in her leaving the university before completing her degree. Later, she would enroll part-time at Delaware County Community College, while juggling working as a teacher’s aide in a pre-kindergarten program and raising three children. Because of her work as a teacher’s aide, she started at the College with an interest in Early Childhood Education. But later, at the recommendation of a faculty member, she switched to Liberal Arts and began attending classes full-time toward her goal of a career in social work. “I always was very interested in how people thought and how they behaved,” she said.

After graduating from the College in 1994, Schank earned a Bachelor of Arts in Psychology from Rosemont College, and then a Master of Social Service degree from Bryn Mawr College’s Graduate School of Social Work and Social Research.

Before coming back to Delaware County Community College to teach, Schank was a licensed clinical social worker for several agencies in the Greater Philadelphia area, and then started her own small, private practice in clinical social work. Later, she would work at the College, first as a part-time Psychology instructor, then as a full-time instructor of Behavioral Science, a position in which she helped formulate the College’s Social Work degree program (formerly the Human Services degree program). “What I am really proud of is being able to work with students in a way that faculty worked with me,” Schank said.

About the Lindback and Gould Awards

Since 1961, the Lindback award has recognized exceptional faculty members at colleges and universities in Pennsylvania and New Jersey. Today, thanks to the vision and generosity of the late Christian R. Lindback, the president and principal owner of Abbotts Dairies, Inc. and a trustee of Bucknell University, along with his wife, Mary F. Lindback, excellence in education is celebrated through the foundation that bears their names. The stipend for each Lindback award is $4,000.

Established by the late Jerry Gould, a Delaware Community College founding trustee, whose commitment to community and service helped make the College a reality, the College’s Gould Award is bestowed at Commencement. The recipient is selected by faculty members and students and is kept secret until Commencement, when the winner is announced. At the College’s May 22 Commencement, Neilda Mott, chair of the College’s Board of Trustees, in presenting the award to Schank said, it is “presented to a faculty member whose dedication, achievement and love for teaching inspire both students and colleagues.” The stipend for the Gould Award is $1,500.

Caption: Former Board of Trustees Chair Neilda Mott (left) presents the Gould Award for Teaching Excellence to assistant professor Kathleen Schank at Delaware County Community College's 2014 Commencement ceremony in May. Schank, who graduated from the College 20 years ago, also won the Lindback Distinguished Teaching Award. She is the first person in the history of the College to win both awards in the same year.

Contact: Anthony Twyman, Assistant to the President for Communications, 610-325-2816