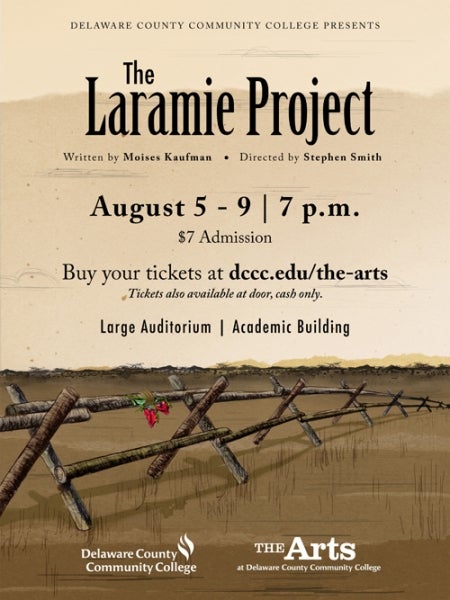 (Delaware and Chester Counties, PA • July 10, 2014)—Delaware County Community College’s theatre department will present The Laramie Project from August 5 to 9, 2014. All shows will begin at 7 p.m. in the Large Auditorium in the Academic Building on the Marple Campus (901 S. Media Line Road, Media, PA).

Written by Moises Kaufman and members of the Tectonic Theater Project, The Laramie Project explores the town of Laramie, Wyoming, and how its citizens reacted to the murder of Matthew Shepard. Shepard, a 21-year-old gay college student, was found tied to a fence, beaten and unconscious on October 6, 1998. He spent five days in a coma before succumbing to his injuries. His murder was denounced as a hate crime and made national news, calling attention to the lack of hate crime laws in many states.

Directed by Stephen Smith, Assistant Professor of Theatre, the performance features 18 student actors playing more than 60 characters. The play is divided into three acts and draws on hundreds of interviews Kaufman and the theatre company conducted with Laramie residents, company members' own journal entries and published news reports.

Tickets are $7 and available for purchase online (www.dccc.edu/the-arts) or at the door (cash only).