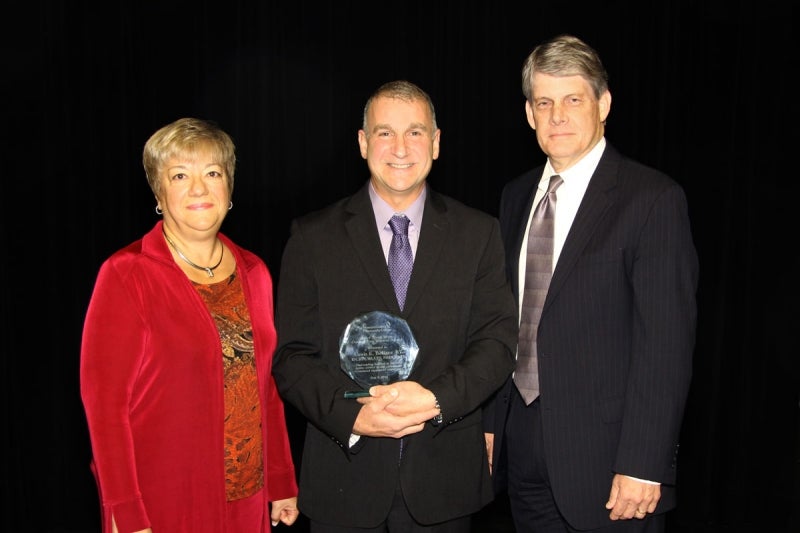 “It’s a distinct honor and privilege to have been selected to receive the Wong Moss Outstanding Alumni Award,” said Bellace in an emotional acceptance speech in which he thanked his family for their unyielding support. It was his son Justin, a current student at the College, who nominated him for the award which recognizes distinguished alumni for their outstanding professional, community and educational accomplishments. The award was created by the late Barbara Wong Moss, a former College trustee, and her son John in honor of Barbara’s father, a Chinese immigrant who believed in the value of education.

From a young age, Bellace wanted to be a firefighter and convinced his mother to allow him to start training at the age of 16. After completing high school, he still wanted to do more for people and decided on a career in nursing. He enrolled in the College’s Nursing program, and was one of two male nurses to graduate from the program in 1987. He went on to earn a Bachelor of Science in Nursing from Villanova University and a Master of Science, Military and Operation Arts from Air University, the United States Air Force Education and Training Command headquartered in Alabama.

Currently, Bellace is an Air Force reservist and flight nurse for the 514th Aeromedical Evacuation Squadron. He’s airlifted wounded warriors from some of the toughest regions of the world, including Iraq and Afghanistan. He’s set to depart on his fourth deployment later this year.

Bellace is also a Flight Nurse for PennStar and a Critical Care Transport Nurse III for The Children’s Hospital of Philadelphia, where he provides helicopter, fixed wing and ground critical care. Last year, he cared for more than 3,000 patients, including infants that fit in the palm of his hand and a crew member who went into anaphylactic shock. As if that weren’t enough, Bellace also serves his hometown as president of the Media Fire & Hook & Ladder Company No. 1.

“Louis’ commitment, passion and accomplishments in his career, community and education are outstanding,” noted Moss on why he and the committee selected Bellace. “He has truly made a difference in all of our lives and it all started with Delaware County Community College.”