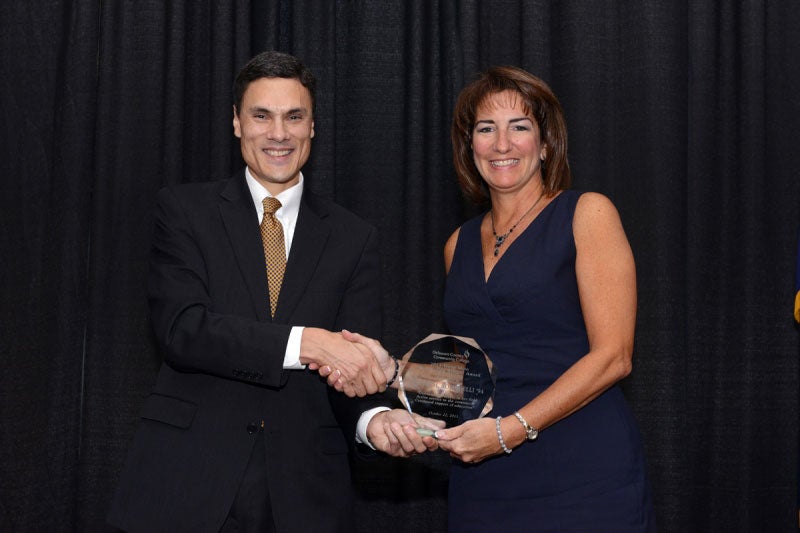 Romanelli of Folsom also was the keynote speaker at the Foundation’s annual scholarship dinner last month at the Drexelbrook Corporate Events Center in Drexel Hill. Having returned to school at the age of 28, she feared she would fail. However, she blossomed at the College, receiving an Associate Degree in Business Management. She later earned a Bachelor’s Degree in Communications Studies at West Chester University and a Master’s Degree in Organizational Leadership at Cabrini College.

“As you pursue your college career, take every opportunity that comes to you,” Romanelli said, urging the College students at the dinner to step out of their comfort zones, work hard and achieve their goals.

Despite having the challenge of raising three children, Romanelli began her professional career in 1994 as an employee development specialist for the state of Delaware. She also was a freelance writer for the Daily Times. In 2002, she was hired at Sun East, where her responsibilities expanded to include professional development training for all employees. Later, she was promoted to manager, and as a leader of the credit union’s community service team, she helped create greater interaction between the employees and local charities. Subsequently, she became director of Sun East’s Employee Development and Community Relations.

In 2008, Romanelli received a first place “Wow! Award” from the Credit Union National Association for her outstanding work in training and development. Among the activities she helped establish were mentor and mock interview programs, career days, Cityteam Ministries volunteer events, a financial literacy program, a scholarship and a teacher award program. In 2004, she received the Sun East Federal Credit Union Volunteer of the Year Pinnacle Award. Today, she is the executive director and co-founder of the Sun East Charitable Foundation, which supports families and educational development. In addition, Romanelli received a Big Brothers/Big Sisters Caring Hands Award in 2001, a Delaware State Governor’s Volunteer of the Year Award, and a Jefferson Award in 2000.

The College’s Wong Moss Award is given to alumni who have achieved distinction both in their professional careers and through their service to the community. The late Barbara Wong Moss, a former College trustee, and her son, John Moss, established the award in memory of Barbara’s father, Wing Wong, who emigrated from China to America, graduated from the University of California at Berkeley and became a food chemist.