Face masks will be optional for students, faculty, staff and visitors who have been vaccinated. Those who are not vaccinated should wear masks. View additional updates at dccc.edu/coronavirus. 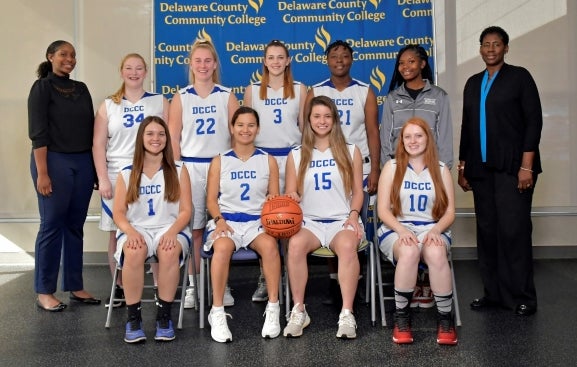 (Delaware and Chester Counties, PA • November 4, 2019)—New beginnings surround the Delaware County Community College women’s basketball squad this season. Forced into a brief hiatus due to low numbers, the Phantoms are back and ready to be heard from in 2019-20.

Leading the rejuvenation of the program is new head coach Dawn Grant. A veteran of the sidelines, Grant comes to Delaware County Community College after 25 years of coaching youth basketball at both the middle and high school levels. Grant served as a middle school boys and girls basketball coach in the East Ramapo Central School District in Rockland County, New York for five years.

She then went on to become the head girls’ varsity coach at Spring Valley High School. During her 10 years at the helm of the program, Grant led the Lady Tigers to three conference titles and a final four appearance in the NYSPHSAA Section One Girls Basketball Championship resulting in Coach of the Year honors voted on by her peers for the league and the section.

Playing at the club level this season, the Phantoms will get an opportunity to see how they match up against the rest of the Eastern Pennsylvania Athletic Conference (EPAC).

A cast of newcomers will look to help Grant restore Delaware County Community College to relevancy, as well as aim for new heights. Leading the way at the guard spot will be Paige Wright, Bryce Johnson, Paige Patterson and Sophia Porras.

“Wright is our point guard who is a solid floor general who sees the floor well and knows how to get her teammates involved,” offered Grant. “Johnson, who has a great shot from behind the arc, is our combo guard who can play both the point and shooting guard positions.” Grant is also looking for “big things” from Patterson, who she names as one of the squad’s most versatile players due to her ability to score outside the perimeter and inside the paint. Porras, an excellent defender, will be the team’s defensive specialist this year.

Destiney Gibson and Lorraine Marrone anchor the Phantoms inside the paint. “Our bigs have been working on improving their post and midrange games all season,” said Grant. “Both players are quick, have a high motor and can pose matchup challenges for our opponents.”

Added versatility comes from Molly Ryan and Tessa Landry, who will both play on the perimeter and inside for the Phantoms this year. “Both players have been working on improving their shooting range and will be a great asset for us this year,” commented Grant.

“We are a fairly new team but play very unselfish,” offered Grant. “We like to share the ball with each other and will look to have a balanced attack on offense and we pride ourselves on being locked in defensively so that we can be in a position to win games.”

The Phantoms have shown a lot of positives in early-season practice. “Our keys to success this season is that if we work hard in practice then games will be easy,” said Grant.  “We like to communicate on the court on the defensive end and are committed to making strides to improve in all aspects of the game throughout the season. “In practice we work primarily on honing our fundamental skill sets and individual development so that we can be the best versions of ourselves during games.”

Grant identifies the team mantra this season as “don’t aspire to be the best on the team. Aspire to be the best for the team.” The Phantoms will look to use that same team philosophy as a foundational piece in what should be a season of growth and development along the way toward establishing the College as a perennial contender. The season tips off on Nov. 9 at Luzerne Community College at 5 p.m. while the home opener will take place on Dec. 3 against Lehigh Carbon Community College at Penn State-Brandywine. Find the full schedule at www.dccc.edu/womens-basketball.