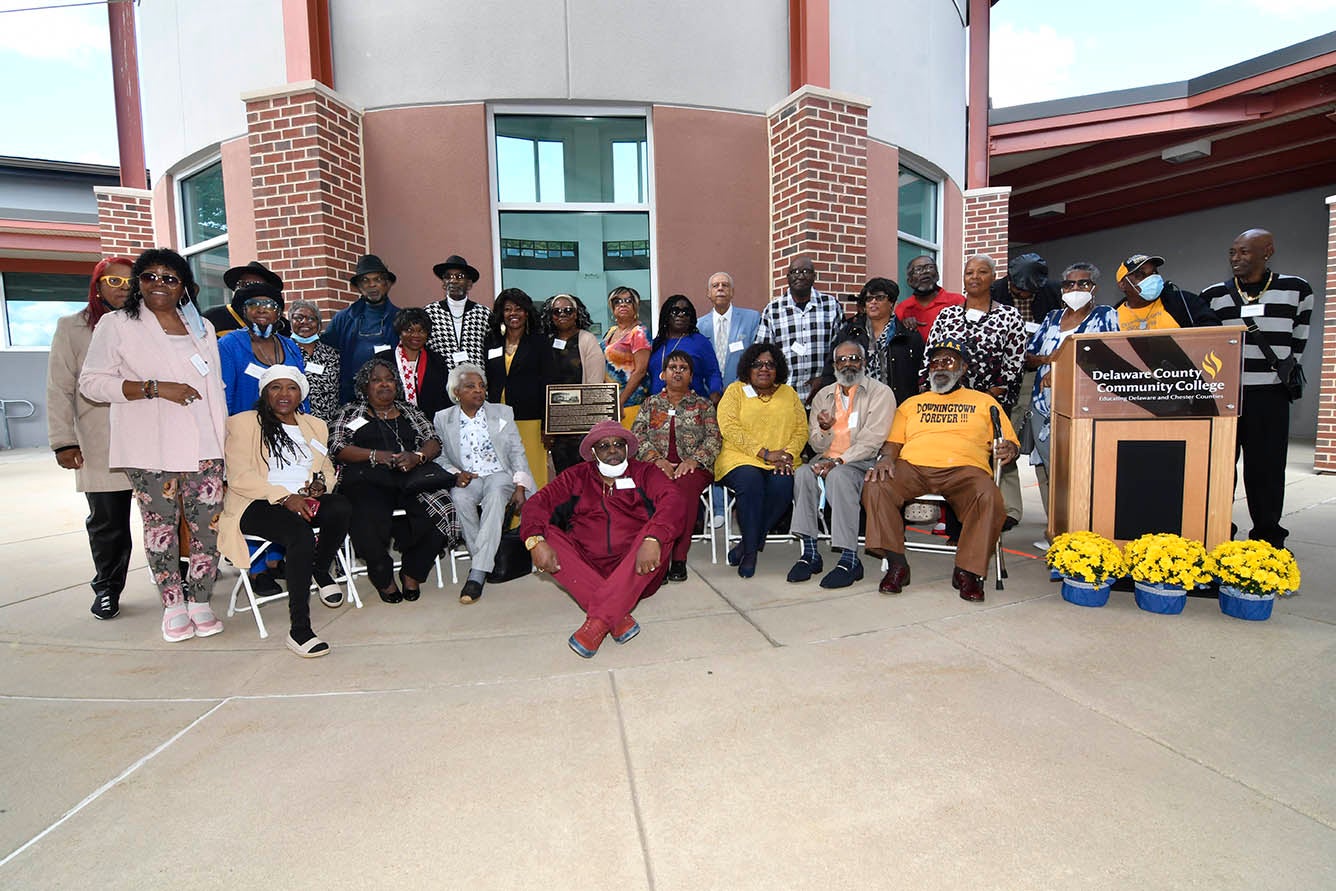 “It is an honor to be here today because DIAS changed my life for the best, and I met my husband, William George,” said 1974 DIAS graduate Gail George. Fellow 1974 DIAS graduate Barbara Thomas thanked the College and the East Brandywine Township Historical Commission for coordinating the event. “It is a tribute and acknowledgement to the founders and all the students who matriculated at this institution,” Thomas said. “It warms our hearts that the land is still used for educational purposes. The unveiling of the marker is a monumental event for us.”

Delaware County Community College President Dr. L. Joy Gates Black gave special thanks to the DIAS alumni, the East Brandywine Historical Commission and the many College administrators, such as Ruth Bennett, the former director of the College’s Downingtown Campus, who worked to bring the memorial event and plaque unveiling to fruition. Bennett, who is now retired and living out of state, returned for the memorial event. “What a wonderful day to be celebrating our shared legacy with our friends from DIAS. It is our honor to help document the important contribution that DIAS made to Chester County and to the Greater Philadelphia region,” Dr. Gates Black said.

Carol Sinex Schmidt of the East Brandywine Township Historical Commission said even though she grew up about two miles from DIAS and went to the former East Brandywine Baptist Church nearby as a child, she did not know about DIAS until 2013 when she discovered a “treasure trove” of DIAS historical documents and photos archived at Temple University. Thanks to that discovery and the willingness of DIAS alumni to come back and share their oral histories about the school, she said, “we feel we are able to keep the memory alive.”

After unveiling the memorial plaque, summarizing the history of the school -- which educated such famous notables as American jazz singer, bandleader Cabell “Cab” Calloway III -- about a dozen DIAS alumni went inside the College, and had their recollections about DIAS videotaped for posterity. James Herod, a 1965 DIAS grad, who showed up at the memorial event sporting a blue cap with “D.I.A.S.” emblazoned on it and a yellow tee-shirt with the words “Downingtown Forever!!!,” said his mother sent him to DIAS after his father died so that he would stay out of trouble. He took general education courses, became an auto mechanic, and then for about 25 years drove a tractor trailer until he retired. “It feels good to come back as an alumnus,” Herod said.

DIAS was founded in 1904 by William A. Creditt, pastor of Philadelphia’s First African Baptist Church, on a portion of a 110-acre site, known as the McFarlan Farm, on the north side of Horseshoe Pike. John Trower, a wealthy catering business magnate and a member of Creditt’s church, provided the funds to purchase the McFarlan Farm.

Inspired by the work of influential educator, author and reformer Booker T. Washington (1856-1915), and his funding and leadership of the Tuskegee Normal and Industrial Institute in Alabama in 1881, Creditt created DIAS in 1904 to provide African Americans with education and training leading to good, family-sustaining wage jobs. The co-ed school opened with 30 students in grades 6 through 12, and Creditt served as the school’s first principal. Teachers and students lived on campus and the school adopted the motto: “self-help through self-worth.” Apart from a period in 1946, when the school experienced a devastating fire, DIAS continued to provide education and child services until 1993. Delaware County Community College purchased the site in 1999 and opened its Downingtown Campus there in 2002.

In addition to academic disciplines, DIAS offered classes in carpentry, plumbing, automotive technology, home economics, typing and business training. Fruits, vegetables, eggs and milk were raised or grown on the campus. Sports programs were added in the 1920s, along with classes to aid students in poise and self-assurance, public speaking, grooming, scouting, chorus and public debate. During the war years, students also received instruction in first aid, military drill and civil defense.

In 1921, Cab Calloway’s parents, concerned about him skipping school, gambling and going to the horse races, sent him to DIAS, which was founded by Calloway’s grandmother’s brother, Reverend Creditt. Calloway, a native of Baltimore, Maryland, stayed about a year at the school and, according to Baltimore’s Commission for Historical & Architectural Preservation, stated: “That year in Downingtown made a big difference. I walked into Downingtown a little boy, and I came out a man. What made the difference was being away from home and having to make it on my own … Downingtown was a turning point for me.”

Above Photo: Alumni from the Downingtown Industrial and Agricultural School (DIAS) stand near a bronze plaque unveiled September 30 to memorialize DIAS, which educated hundreds of African Americans from 1904 to 1993. 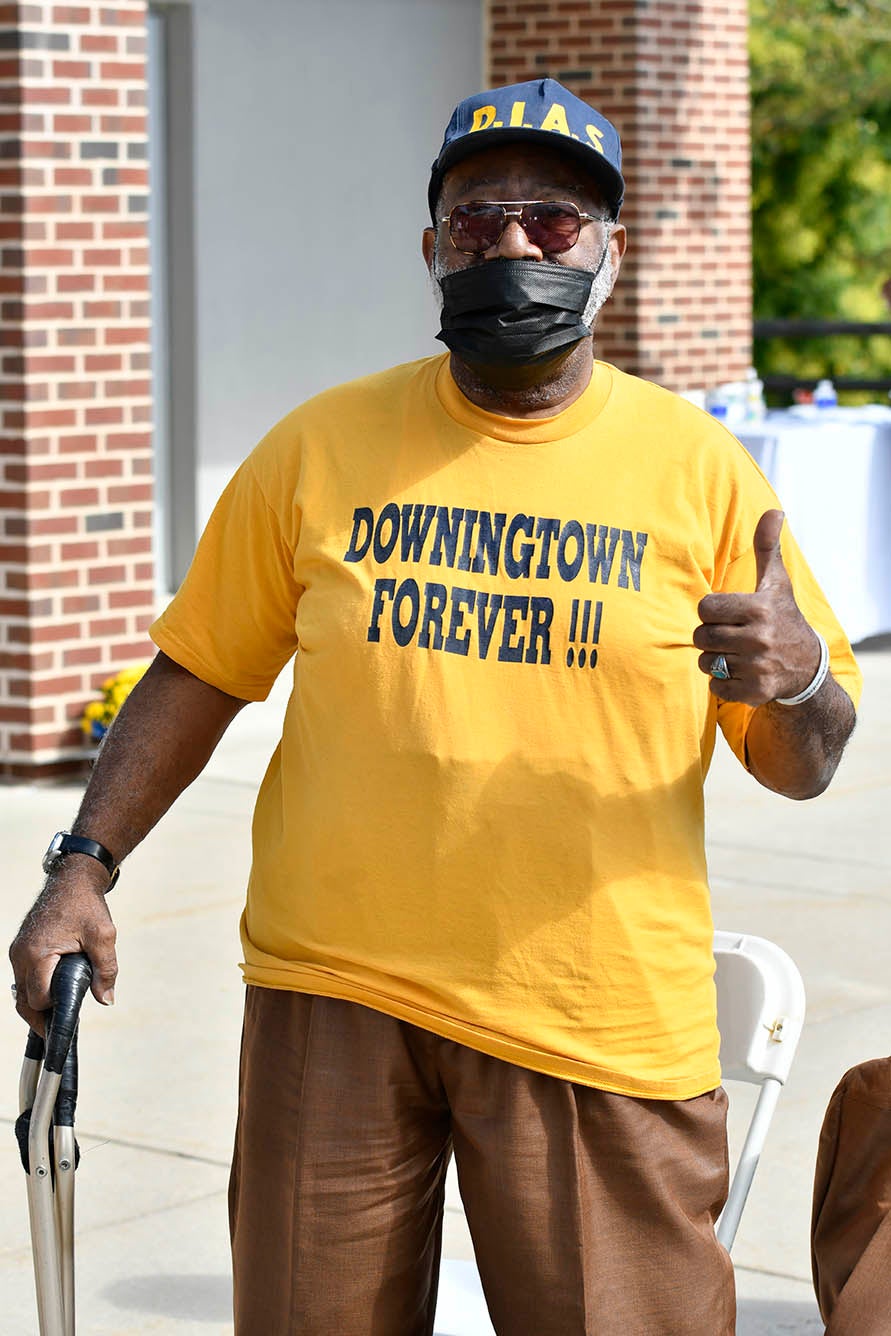 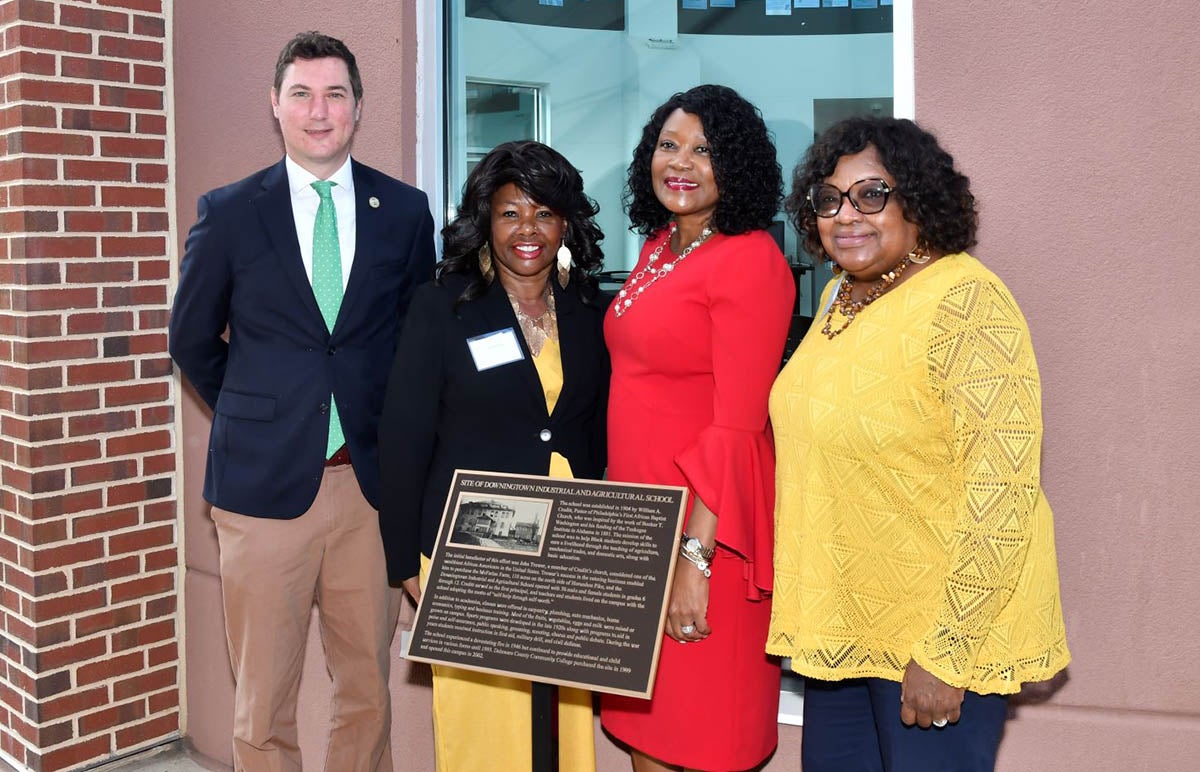