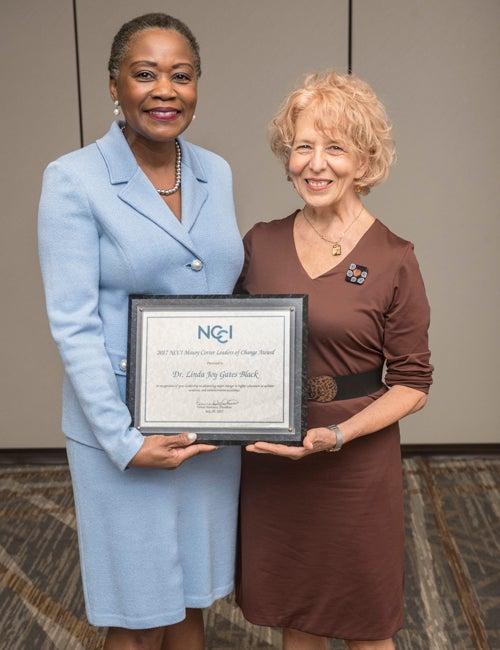 (Delaware and Chester Counties, PA • August 10, 2017)—Delaware County Community College President Dr. L. Joy Gates Black was a recipient of a 2017 Maury Cotter Leader of Change Award last month from the Network for Change and Continuous Innovation, an international professional association that promotes innovation and collaborative networking in higher education among its more than 1,000 members worldwide. Dr. Gates Black was one of two recipients of the award and was recognized at NCCI’s annual conference, July 27-29, in Minneapolis, Minnesota.

Through its Leader of Change Award program, NCCI seeks to “identify and support those individuals who are leading change on their campuses and to grow the network of change leaders within higher education,” said NCCI President Teresa Hartnett, who also is assistant dean of Finance and Administration at the University of Tennessee’s Health Science Center in Memphis, Tennessee. “They truly reflect the values of NCCI: innovation, continuous improvement, collaboration, excellence and diversity of perspective,” Hartnett said.

Earlier this year, Dr. Gates Black was unanimously selected by the Board of Trustees of Delaware County Community College and became the first female and the first African-American president of the College on July 1. However, she received the Leader of Change Award for work she did while at Tarrant County College (TCC) District, a community college in Fort Worth, Texas with more than 100,000 credit and non-credit students and multiple campuses. She joined TCC in 2010 as vice chancellor for Student Success, during which time she also served as interim president of TCC’s South Campus. She later became TCC’s vice chancellor for Academic Affairs and Student Success.

“I am humbled to be recognized for the work we were able to do at Tarrant County College. The institution is well positioned to meet the needs of its current and future students,” Dr. Gates Black said.

NCCI selected Dr. Gates Black in part because of TCC’s nomination which called her a “strong, visionary leader” who helped shift TCC’s primary focus from providing students with access to college to helping students successfully complete college and obtain an associate degree or other credential. “Under her direction, TCC transformed from a 50,000+ credit student, multi-campus organization with an average graduation rate of 8% to what it is now, the 15th leading graduate producing college or university in the United States.”

The other recipient of the Maury Cotter Leader of Change Award was Paula Gill, vice president for Institutional Effectiveness at Belmont University in Nashville, Tennessee. The award is named after NCCI founding member and past president Maury Cotter, who retired in January after a distinguished tenure as the director of the University of Wisconsin-Madison’s Office of Quality Improvement.