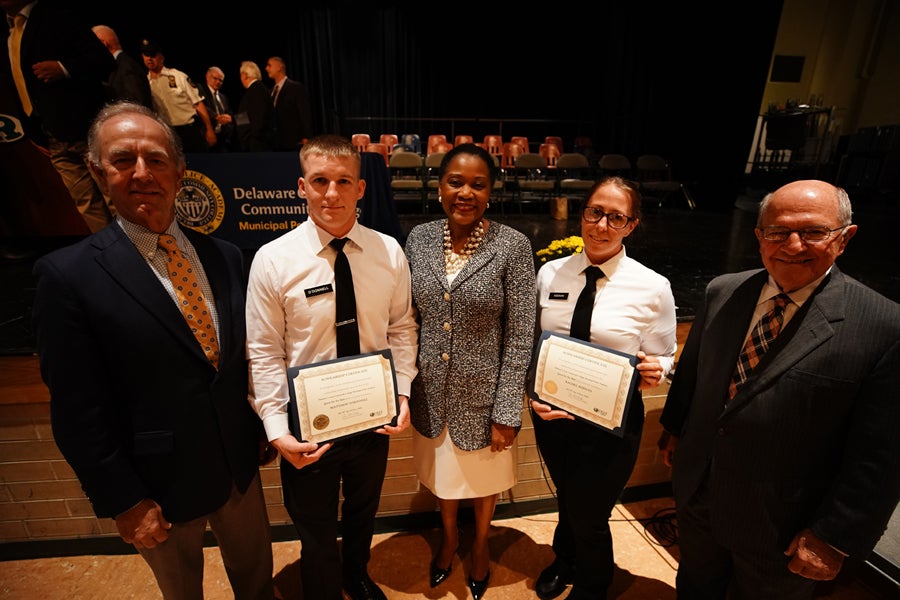 Delaware and Chester Counties, PA • June 19, 2018)—Delaware County Community College’s Municipal Police Academy has broken another record. Twelve female cadets—the most to have ever graduated at one time from the Police Academy—were among 48 students lauded at the Academy graduation ceremony held at Ridley High School in Folsom on June 14.

The newly graduated female cadets join 10 women who graduated last year, which broke a record, marking the most female cadets to have graduated at one time. “We are seeing an increasing number of women entering the Academy, and I could not be more pleased,” said Delaware County Community College President Dr. L. Joy Gates Black, a U.S. Air Force veteran and the first female president in the College’s 51-year-history.

Keenan also was one of about a half dozen cadets who had the special honor of having a family member give them their Pennsylvania Act 120 certificate for successful completion of their municipal police officer training. She received her certificate from her sister, Sara Keenan, a police officer in Ridley Township.

This year’s class of graduates had the distinction of being the first in the 41-year-history of the Police Academy to complete a new more rigorous, 920-hour curriculum, which included 166 more hours of instruction in firearms, physical fitness, self-defense, and Homeland Security, as well as scenario training and practical exercises. “Take pride in knowing you have successfully completed one of the most rigorous police training programs in the country, run by expert faculty, many of whom are active police chiefs, supervisors and law enforcement officers,” Dr. Gates Black said.

Delaware County District Attorney Katayoun Copeland, the graduation keynote speaker and a former instructor at the Police Academy, urged the graduating cadets to love and uphold the law and to serve the community. “You respect it. You prioritize it. You know it,” Copeland said of the law, adding that community residents will judge them based on how well they apply the law with honor, commitment and compassion.

Dr. Gates Black reminded the cadets of the Police Academy’s outstanding history. “Today, you will become part of a rich, history of Police Academy alumni who have utilized the knowledge and training they received to become some of the top law enforcement personnel in the country,” Dr. Gates Black said. “Like those who have graduated before you, you represent the best of what Delaware County Community College has to offer in education and training. It is no wonder that chiefs of police throughout the region, Delaware and Maryland look to us when they have openings.”