More than 1,500 Students Graduate from the College 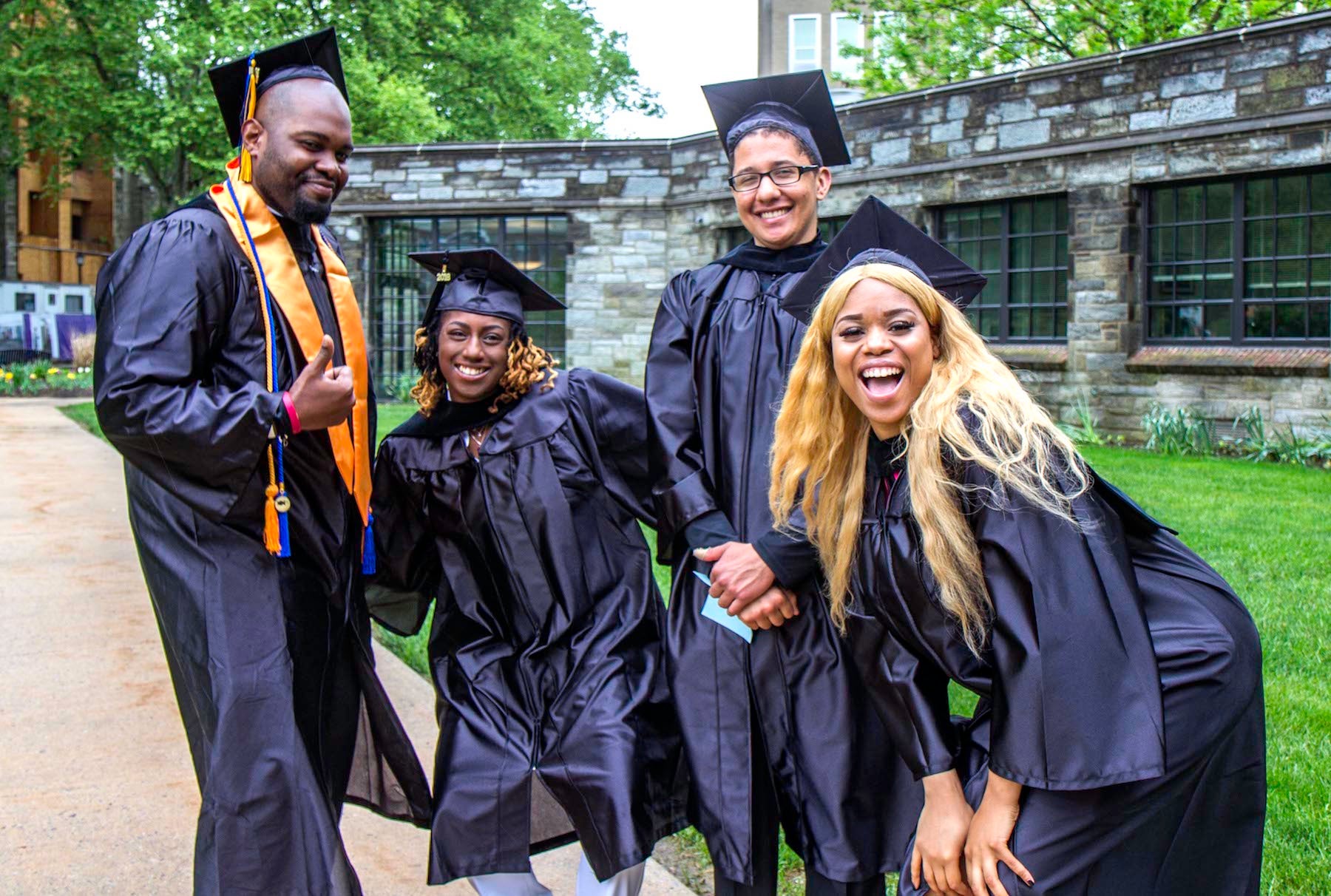 (Delaware and Chester Counties, PA • May 17, 2018)—More than 1,500 students received associate degrees and certificates from Delaware County Community College on May 17 at the Hollinger Field House in the Ehinger Gymnasium on the North Campus of West Chester University.

This year’s commencement speaker was also the Alumni Professional Achievement Award winner, Habibah Sulayman Smith ’04 of Drexel Hill. Smith is a project specialist for the U.S. Department of Health and Human Services’ Runaway and Homeless Youth Program. Nearly two decades ago, Smith, then a 26-year-old, single mother with three kids who was struggling not to become homeless a second time, came to the College seeking an education and a better life for her children. Today, Smith is married, no longer homeless and using her life experiences to encourage others, especially young women, to never give up and keep striving for their goals. She is an author, inspirational speaker and life coach who has served more than 17 years in the social service field working to better the lives of women and children.

To see photos from the day, visit our 2018 Commencement Photo Gallery.

Below are profiles of a few of the graduates:

Denise Rohr-Williams of Malvern – at 51 years of age, Rohr-Williams was also a recipient of an award for academic excellence in her major, General Business. As a child, Rohr-Williams, traveled from country to country in Europe with her grandparents, who raised her and spoke only Polish. In her culture, she said, women were not raised to think that a college degree was something they could attain. Much later in life, she decided to go back to school and enrolled in an English as a Second Language course at the College because she did not speak English. “Deep down inside, I always wanted an education,” she said. Nearly 12 years later, after taking courses part-time while working full-time as caretaker of a Malvern estate, and after overcoming the death of her child and her grandmother, her husband’s cancer, several learning disabilities and her own bout with cancer, she is graduating as one of the top students in her class and is proud of what she has achieved. “I just stuck it out,” she said. “I said: ‘This is something I need to do’.” In the future, she plans to pursue a career in medical billing and coding, and plans to take more courses at the College this summer.

Britney Spinelli of Marcus Hook – Spinelli graduated with both a certificate in Process Control Technology and an Associate in Applied Science degree in Advanced Technology. Born and raised minutes from the former Sunoco refinery in Marcus Hook, Spinelli originally took courses at the College to become a nurse, but decided she would be better suited to a career in advanced manufacturing. She prides herself on being able to do tasks traditionally done by men. “When I was 13, I joined the Marcus Hook Fire Department Cadet Program. I was the only female in the program,” she said. “Whenever there was a question of whether I was capable of doing what the guys could do, I prevailed.”

Yesenia Diaz (Lopez) of Kennett Square – Diaz is a straight-A student and one of 46 community college students statewide selected as All-Pennsylvania scholars, an honor which includes free tuition for two years at any of the state’s 14 Pennsylvania State System of Higher Education universities. She graduated from the College last December, but participated in Commencement. She is currently attending West Chester University. A native of Mexico, she was instrumental in reestablishing and substantially increasing the membership of the College’s student-led LatinX Student Association, which fosters understanding of Hispanic cultures and helps raise money for the College’s Dream Today scholarship. Diaz also was a student success ambassador and a peer mentor at the College. She works part-time at a banquet facility in Aston and also as a work-study student at West Chester University in the office of the Dean of Arts and Humanities. Diaz is interested in becoming an entrepreneur and owning her own business.

Sourou Mariette Carolle Zounon of Upper Darby – Zounon is a straight-A student who, like Diaz, also is one of the 46 community college students statewide selected as All-Pennsylvania scholars. A native of Benin, Africa, Zounon is a devoted mother of two small children, who found time to volunteer at the College as a peer mentor. She also helped beautify a community garden next to the Darby Borough Free Library while interning for the Darby Borough Community Development Corporation. She works part-time at EMS Financial Services in Aston. Previously, she volunteered at VITA (Volunteer Income Tax Assistance), which provides free, tax preparation assistance to low-income people. Zounon is interested in becoming a certified public accountant.