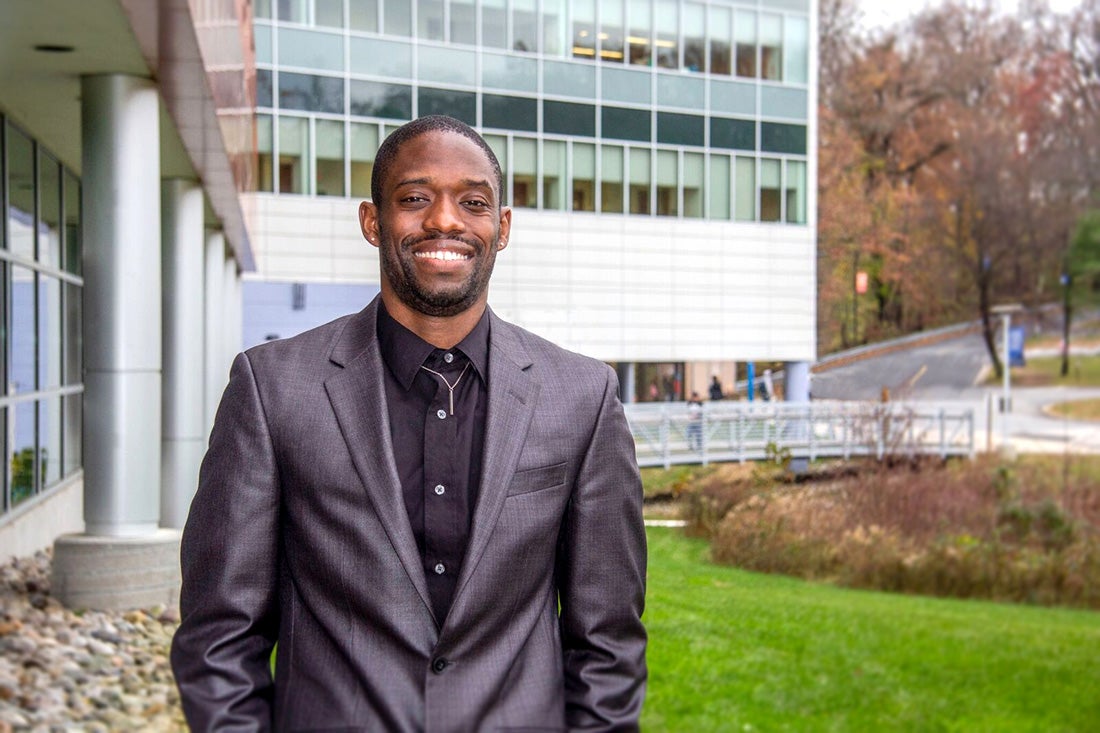 (Delaware and Chester Counties, PA • January 28, 2019)—Dumpster diving, panhandling and drinking were once everyday activities for Frederick Shegog. In his early twenties, he entered a spiral of addiction that pulled him away from his childhood dreams. Despite a decade of alcohol abuse and time spent homeless, Shegog was able to transform himself into an honors student at Delaware County Community College in just two years. Now, as a motivational speaker, he is on a mission to help others combat substance use disorder and to change the way colleges serve students in recovery.

Shegog, an affable Communication Arts major who goes by Freddy, is a well-known face around the Marple Campus. Spend time with him, and you will soon witness a stream of students, faculty and staff stopping him for a hug or to share a laugh. He says he learned the art of conversation while homeless, when relying on strangers was vital to survival. As quick as he is to tell a joke, Shegog is also open and honest about his struggles.

Growing up, Shegog was exposed to the realities of substance use disorder because addiction affects both sides of his family. When he was ten, his mother attained sobriety and later started a career in the recovery field. Through her, Shegog acquired a wealth of information about recovery resources, including Alcoholics Anonymous. This helped him know where to turn when his own substance use disorder took him to his lowest point: begging in Philadelphia outside the Ritz-Carlton and eating doughnuts from a discarded box he had found in a dumpster. Shegog understands, however, that others are not as equipped to find help, which is where collegiate recovery programs (CRPs) come in.

Institutionally sanctioned and supported, CRPs provide a variety of resources to students in recovery or those dealing with substance use disorder. The Association of Recovery in Higher Education estimates that approximately one in five young adults between the ages of 18 to 21 meet the criteria for substance use disorders, putting colleges at the forefront of an issue that claims nearly 200 lives per day (according to an August 2018 report from the National Institute on Drug Abuse).

“As a 36-year-old student in recovery, I see a need for CRPs at all schools,” Shegog says, “but especially at the community college level, where there are many students like me, who are getting back on track after experiencing addiction.” He adds that CRPs are essential because they provide resources to students and shift the stigma surrounding addiction.

While limited resources can hinder institutions from implementing a CRP, being mindful of the unique needs of individuals in recovery is an important first step. At the College, students like Shegog have access to personal counseling and assistance finding additional resources. “The Career and Counseling Center maintains a comprehensive referral file which can assist the student in finding an inpatient or outpatient treatment program, a therapist or an Alcoholics or Narcotics Anonymous program,” says Christine Doyle, Assistant Professor and Counselor. “Creating a network of support for the student is essential to his or her success and the Career and Counseling Center helps to build the foundation necessary for growth and healing.”

At the College and beyond, Shegog is doing his part to address substance use disorder through his motivational-speaking organization The Message. “When I first got clean, I had to ask myself: Is it good enough to be sober or do I want to make a difference in the world?” Through his company, he inspires, educates and helps create healthy lifestyles for all. “I sell hope for a living,” he adds, smiling when he describes a recent gift from his daughter: a bracelet inscribed with the words “hope dealer”.

His unwavering dedication to spreading hope has already taken him places he could not have imagined while homeless and in-and-out of treatment programs. In October, he was the only student speaker to present at the Pennsylvania Black Conference on Higher Education’s annual Student Leadership Development Institute, and in February, he is slated to speak at Clarion University. An assignment he wrote for English class, titled “Resources for Students in Recovery Should Be as Common as the Bookstore,” was published in The Philadelphia Inquirer in August. And recently, Gary Tennis, President and Chief Executive Officer of the National Alliance for Model State Drug Laws, personally tapped Shegog to assist with the Model State Collegiate Recovery Act.

While all of these achievements could make one lose sight of his roots, Shegog remains humble and gracious. “My success in recovery is only possible because of the support that was available to me through the help of many people, some of whom I met at Delaware County Community College.”

Shegog, who resides in Drexel Hill, enrolled at Delaware County Community College in the fall of 2017 because he knew community colleges offer a variety of educational support services. Through Act 101 and the Keystone Education Yields Success programs, he found his footing and was introduced to a few of the people he credits most with his success: counselor Rose Kurtz; Dr. Kendrick Mickens, Director of First Year Experiences; and Erica Reeves, Retention Specialist. “The personal connections I’ve made with faculty and staff have changed my life personally and academically,” he says.

As a college student, Shegog has flourished. He maintains a 3.5 GPA, has earned several scholarships and was recently inducted into the Phi Theta Kappa honor society. In November, he received a scholarship from The Ammon Foundation and membership in their Recovery Scholars Program. The award letter commended his “extraordinary example of leadership, hope and recovery.”

After finishing at the College, Shegog will transfer to Cheyney University on a full scholarship thanks to the Keystone Honors Academy Scholarship program. As a recipient of this highly selective scholarship, Shegog will receive full tuition, room and board and other special services geared toward student success.

When asked about his future, Shegog describes even bigger plans. He wants to earn a doctorate in communication studies so he can expand his business and affect policy changes for students in recovery. “I hope that one day soon, students will not have to fight for addiction and recovery services,” he says, “but that they will be as common as finding the bookstore.”