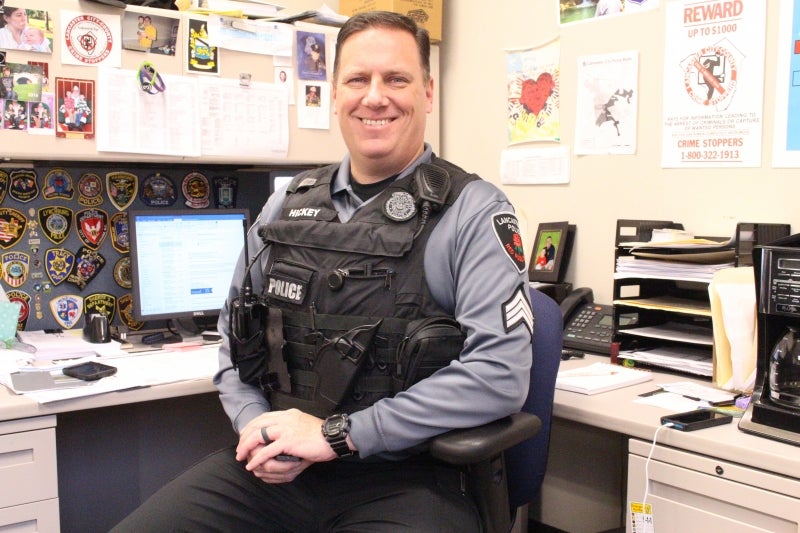 Social Media has connected us all around the world in a variety of previously unanticipated ways. Police Departments are turning to Facebook and Twitter to communicate better with their citizens while sharing important updates at the same time. A good example of this is being practiced by Sgt. William Hickey ‘97 of the Lancaster City (PA) Police Department. Whether sharing statistics or posting humorous GIFs, Sgt. Hickey has become a great model of a police officer in the age of social media. We hope you enjoy his story and consider following his department’s activities on their Facebook, Twitter and YouTube and Instagram channels.

What year did you graduate from Delaware County Community College and with what degree?
“I graduated from the College in 1997 with an Associate Degree in Administration of Justice.”

Did you pursue further academic goals?
“After graduation, I entered into the Criminal Justice program at West Chester University. I received my Bachelor of Science in Criminal Justice in the fall of 1998.”

Where are you now?
“I am employed by the Lancaster City Bureau of Police in Lancaster County, Pennsylvania. My current title is Crime Prevention Sergeant. I wear several hats in my current position. My primary responsibility is to supervise (5) School Resource Officers, (1) Police Athletic League (PAL) Officer and (1) Officer that works in many of the elementary schools in a program titled Teaching, Educating and Mentoring (TEAM).

I also serve as the Public Information Officer (PIO) for our department. I deal with the news media for requests for information. I also publish information about what the department is doing through regular updates. We try to contact the public as much as possible through daily news releases, case updates and information on higher profile investigations and arrests. We utilize many platforms to accomplish this. The department realizes that most people get their news via the internet and social media, so we are trying to reach out to them in the ways that they like to communicate.

Our primary platform is the law enforcement network Crime Watch. When I publish something through Crime Watch it automatically generates a link and publishes it on our department Facebook and Twitter feeds. We also produce and publish informative videos on our YouTube channel and finally, the department also has an Instagram account.

The International Association of Chiefs of Police (IACP) recently helped to produce a video that was featured at their 2016 annual conference in San Diego. It highlights many programs that our department has that helps us to reach out to the community.

How has the use of social media had an impact on your career and the department on a whole?
“With our social media outlets, we believe that we can better reach those in our community on a number of levels. We push out news content daily (police log of items of interest, high-profile crimes significant arrests, persons of interest). We also try to educate people on crime prevention issues and how to deal with crime trends.  We also use those platforms to highlight the good work done by the members of the Lancaster City Bureau of Police. We want the community to know how hard their Officers, Detectives and others are working for them.”

“We try to keep a balance of news items and some things that keep it a little fun. People really seem to enjoy seeing pictures and videos of our Officers in the community. They really love anything and everything to do with our K9 and Mounted Units. This exchange on Twitter made a few people laugh.

“We frequently get “tagged” in Twitter posts meant for the numerous other Lancaster Police departments around the world (Ohio, South Carolina, New York, California and Great Britain) Sometimes I just make people aware of the error and direct them to the correct agency. Other times I have some fun with it. There was a Twitter account in California that had tagged us in a tweet stating that we should “free” their friend, and that ‘if the glove don’t fit, you must acquit’ My reply was ‘good luck with the Cochran strategy. You could have also gone with ‘These ain’t my pants.

’What is next for you professionally?
“I still have a couple of years before I can retire from the department. When my time comes to take off the badge I think that I would like to stay connected to the world of criminal justice through either a Public Information Officer position in a community arena or possibly as an educator. I think that it is important for officials to pass along their knowledge and experience to the next generation of professionals.”

What is your favorite memory of your time on campus, outside of the classroom?
“I was working full-time while I was taking classes, so I did my best to arrange my schedule to have classes on Tuesdays and Thursdays. It made for a fairly long day of classes. I had good memories of getting most of my academic work done between classes in the lounge and library.”

Did you have a favorite professor or class during your studies?
“I remember taking a class with the former Upper Providence Township Chief of Police, Tom Davis. This was in the midst of the Amy Willard homicide investigation. I saw what a circus the media had made of the case and how much stress was placed on his agency and the Pennsylvania State Police to find Willard’s killer. I was fascinated by how Chief Davis was able to preserve a balance of dealing with the investigation and his duties as an educator.”

What advice would you give to current students and Alumni to capitalize on the education they received from the College?
​“Don’t wait to get started in your career in whatever aspect of law enforcement you choose. Get out there and find out who is hiring. Take the tests, fill out the applications, get on the consortium lists, and try to find practical experience that translates to a full-time career. When I was at West Chester, I completed my practicum (internship) requirement by working as a Seasonal Police Officer with the Ocean City (MD) Police Department. The two seasons that I worked with OCPD along with my education from the College and West Chester helped me in getting hired by Lancaster City. There are other agencies in Delaware and New Jersey that have similar Seasonal Officer programs.”

“The process of selecting quality candidates for hire tends to be lengthy, exhaustive and frustrating. Don’t be discouraged if you don’t get hired by the first agency where you applied and tested. Having a background in criminal justice education can set you apart from an otherwise equally qualified candidate.”