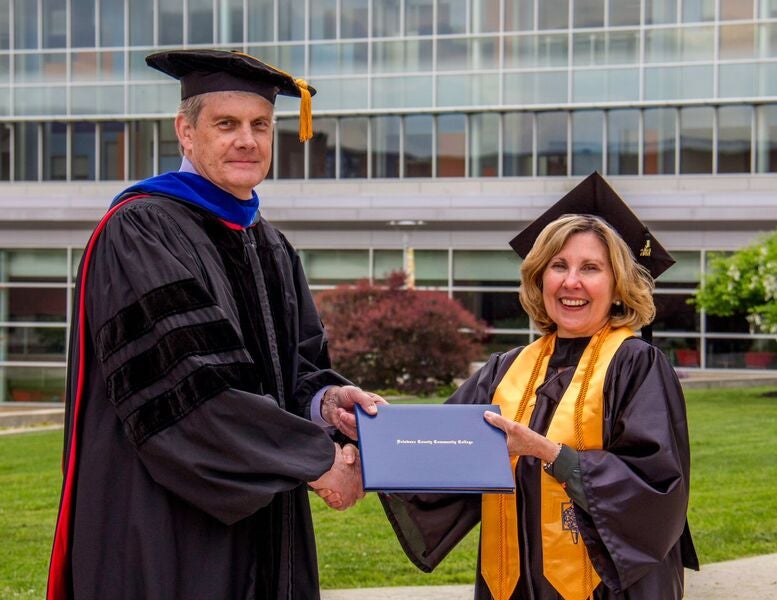 Last month, the College honored nearly 600 graduates and their families at Commencement. As students processed through Villanova’s Pavilion, they were led by one special graduate, Loretta Bevilacqua, who is also the Executive Assistant to Dr. Jerry Parker, the President of the College. Loretta was originally hired in 2005, but has served Dr. Parker in this essential role since 2010. Her strategic interactions with faculty, staff and Board members help Dr. Parker daily as he leads eight campus locations in two counties serving approximately 11,000 students annually.

Loretta completed her Associate of Science in Business Administration while receiving academic high honors. Her graduation is well deserved but also bittersweet as she recently announced plans to retire after Dr. Parker also retires from his own four decades of service to the College. At campus meetings, Dr. Parker would always joke “A lot of people think Loretta works for me, but it is the other way around. She really runs this place on a daily basis.” Dr. Parker recently had this to say about Loretta’s big day “It’s been nothing short of great working with her and I want to congratulate her on a job well done in achieving her degree.”

In her own words, here is Loretta’s heartfelt story which is a testament to her belief in the power of a community college education.

“In May, a lifelong dream of attaining an advanced degree finally came to fruition as I was one of over a thousand graduates of Delaware County Community College. I couldn’t contain my excitement as I awoke several times the night before Commencement in anticipation of the event. During the ceremony, I couldn’t stop tapping my feet as I was surrounded by administrators and faculty who inspired me, and loved ones who supported me through every meltdown-period during my journey. I listened to the speeches, and anxiously awaited the time when I would hear my name called to make it official.”

“Mr. Michael Ranck, Chair of our Board of Trustees, and Dr. Eric Wellington, our Acting Provost, mentioned in their speeches that education is a gift. This brought me back to a time when my three daughters were young and I would talk to them about their education and the need to continue in school. I told them that education was a gift that no one could ever take away from them; it could never be lost or discarded. Little did I know how those words would resonate with me years later.”

“I was an average student in grade school and high school.  I never thought of college as being an option. Because I wasn’t strong in math and science, I was advised to take secretarial courses in my junior and senior years. My path was laid out for me – to be a secretary. I worked until my first daughter was born and decided to be a stay-at-home mom. During that time, I volunteered at the school, and with permission of our parish pastor, began a Respect for Life Program for grades 1 through 8. After selecting curriculum and soliciting my friends and other moms I knew in the parish, we began going into the classrooms once a month to facilitate learning about our responsibility to respect and care for each other and to open the students’ eyes to the struggles of many people in the world.”

“It was then that I began to realize I was capable of much more. When my youngest daughter was in 7th grade, I decided to re-enter the workforce. I was hired by Delta Air Lines, and I must say, this opportunity opened up a whole new world for me. Delta’s philosophy was that training was an integral part of success, and so during my 15-year tenure at the company, along with several promotions came many, many training sessions. While everyone dreaded attending these classes, I loved them, but I knew that without a College degree I could only advance so far.”

“When the airline industry began to change, I knew it was time to move on. In 2005, I accepted a position with Delaware County Community College. This is when my world truly opened. I was interacting with educators and administrators who were so accepting, asking for my opinions and ideas, valuing who I was and what I had to say. These are the professionals who truly inspired me. I had taken the advice I had given my daughters - education is a gift - and started my journey towards completing my degree.”

“Today, I feel so privileged to have been instructed by some of the most wonderful faculty members. Business instructors who not only taught the curriculum, but shared their own experiences while working in the business world. Among them are my Intro to World Religions instructor, who was so authentic in each religion he taught that I still find myself wondering  what are his religious beliefs; my accounting instructor, who through his teaching method made me ‘see’ what I needed to know, and kept telling me to accept it as fact and not to think logically. He was amazing, and I was so proud to complete the class with an A; my psychology instructor who focused on positive psychology – the importance of paying it forward, surrounding yourself with the simple pleasures of life, and being mindful of the amazing people you love and those along the way we can inspire and appreciate.”

“As I sat at Commencement listening to the speeches and thinking of my journey, I realized the gift of education is much more than something no one can ever take away from you. I realized it is life altering. It opened my mind to think differently, accept differences and understand and look for the goodness and value in everyone.”

“As I plan to retire from the College in August, I look forward to the next journey. One thing is certain, I know I will never stop learning - it’s exhilarating and the greatest gift I can give to myself.”