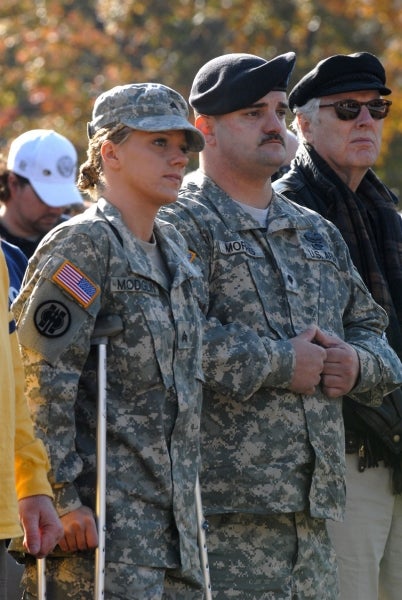 Last spring, the Alumni Association was pleasantly surprised to see one of our graduates featured on Good Morning America with Robin Roberts. It was the week before graduation, and Danielle Joliet ‘07 was honored as Penn State University’s 2017 Outstanding Adult Student. The segment highlighted Danielle’s academic success, in addition to her service as a Military Police Officer during Operation Iraqi Freedom. Danielle’s story is remarkable on several fronts because there’s a good chance she should not even be here today. Her story includes a history of drug and alcohol addiction that almost derailed her success.

Growing up and using drugs from an early age, Danielle entered the military to get a fresh start and find a sense of purpose. After her first tour, she met a fellow soldier, got married and eventually had a son. In 2005, her desire to serve the community, while also raising her son, led to her enroll in the College’s Municipal Police Academy. She juggled classwork and her role as a wife and mother while working the 11 p.m.-3 a.m. shift at UPS, followed by a two-hour nap before restarting her day.  After graduation in 2006, she worked several part-time patrol shifts with the Southeast Delco School District as well as the South Coatesville and Yeadon Borough police departments.

In 2008, Danielle’s military reserve unit was called to return to Iraq and she faced a difficult decision. She ultimately answered the call to duty and had to explain to her then six-year-old that she had to deploy overseas. It was during this tour that she suffered a severe stress fracture to her hip and was eventually transported back to Walter Reed Medical Center and received a medical discharge. During this time, Danielle experienced a relapse while recovering from her injury.

Despite these challenges, Danielle decided to reenroll in classes at Delaware County Community College and also began connecting with other soldiers who were using drugs as a coping mechanism for the experiences they faced while deployed. Through these outlets, Danielle was able to get back on a path to success. Danielle eventually enrolled in Penn State’s College of Education program and graduated in May, 2017 with a 4.0 GPA. She now uses her personal experiences in a professional role as the new Assistant Program Coordinator for Penn State’s Collegiate Recovery Program. Danielle also views her two sons as an inspiration to stay strong and as a reminder to not slip back into the pattern of addiction she has overcome several times.

In celebration of Veterans Day, we would like to congratulate Danielle on all of her achievements while also extending our thanks to all of our alumni veterans for their service to this country.

To view Danielle’s appearance on Good Morning America, and learn more about her remarkable story, follow this ABC News link.

Special thanks for help with this story to Shandalea Wollaston, current student and writer for The Communitarian, who conducted a detailed interview with Danielle over the summer.