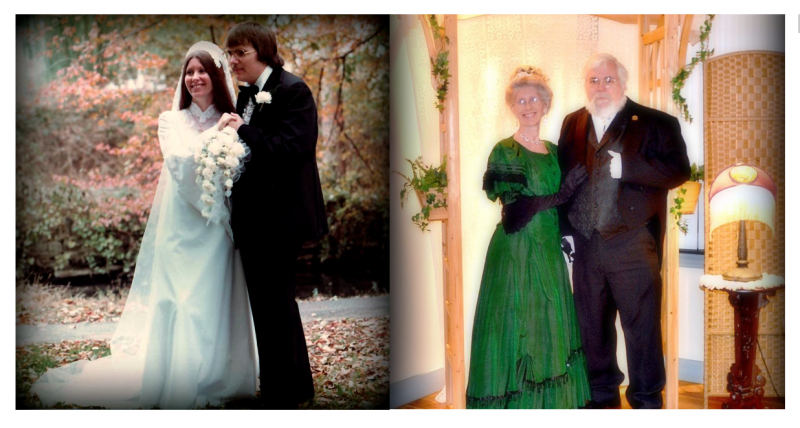 Each February, we like to share with you the story of two students who met at the College and eventually got married. This year we are pleased to share the story of Anthony and Barbara Selletti, who have been together for 40 years.

In 1974, a young man named Anthony “Tony” L. Selletti arrived on the new Marple Campus with the goal of becoming a pharmacist. He planned to take science courses and then transfer to a four-year college. A year later, a young woman named Barbara J. Frank arrived on campus with the goal of becoming an art therapist. She planned to take psychology and sociology courses, then transfer to Thomas Jefferson University.

What actually happened was that these two young people crossed paths at several campus events and by October of 1976, they were married. Barbara gave up her studies to become a full-time mother and caretaker to her invalid mother, while Tony decided that nursing had more of an appeal than becoming a pharmacist. He would go on to be one of three men to graduate in a predominantly female class at Camillus Mercy Nursing School in Darby. Tony would work at Sacred Heart Hospital in Chester as a medical/surgical nurse until it closed, then briefly at Crozer Chester Medical Center and Fair Acres before becoming the Central Supply Manager for ManorCare Health Services in Wallingford.

In 1990, Barb was diagnosed with stage one uterine cancer. She decided it was now or never to get back to the College and finish her coursework. Although she still loved psychology, she switched majors to Graphic Design (art therapy was still in the back of her mind). In 1993, as a member of Phi Theta Kappa, she graduated with honors with an Associate of Arts under the watchful eyes of her proud family and friends. Two years later, Barb’s eldest son, Anthony J. Selletti (AJ), would enroll (and work) at the College.

Because of her well-rounded educational background, Barb was hired immediately by a small printer in West Philadelphia. Her traditional graphic design skills coupled with a computer background allowed her to do some of her work from home in her private studio.

Still debating where to go next, it would be a serious traffic accident that reminded her that time waited for no one. After recovering from her injuries, Barb enrolled at Neumann University as a Psychology major. She worked two part-time jobs at a book store and at Neumann’s Library and went to school full time, a grueling schedule, but she was focused. She eventually was hired full time as the Interlibrary Loan Librarian at Neumann.

Graduating with honors in 1998 with a B.A. in Psychology, Barb would be joined by her husband Tony and son AJ who would both received their B.S. in Computer Information Management. Barb and Tony’s youngest son Nick would later graduate with a B.A. in English.

Barb later obtained a M.S. in Pastoral Counseling in 2001, which she uses in the ministry of bereavement. She plans to work towards a PhD in Psychology.

Barbara and Anthony have shared not only the start of their educational life at Delaware County Community College, but also celebrated an enduring friendship which has lasted forty years. Few college friendships can boast that they will last a lifetime. They both agree that the College has been and always will be special to them.

Picture and story by Barbara Selletti '93