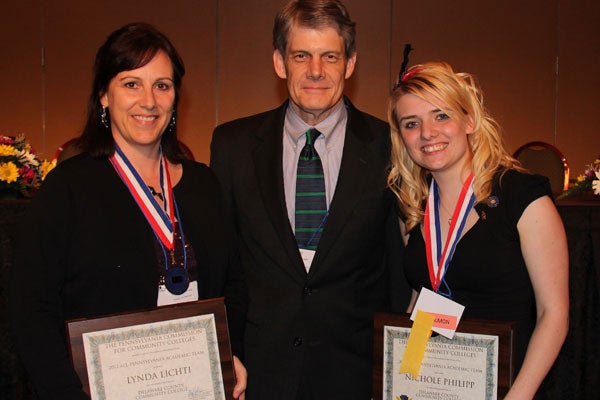 (Delaware and Chester Counties, PA, April 3, 2012)—Nichole Philipp of Media yesterday became the only community college student in the state to be named a 2012 Coca-Cola New Century Scholar, a recognition that comes with a $2,000 stipend, a plaque, a listing in the April 23 edition of USA Today newspaper and accolades from the Pennsylvania Commission for Community Colleges and the American Association of Community Colleges.

Philipp is one of 50 community college students from the United States, Canada and Guam to be named 2012 New Century Scholars. She was honored by the Commission last night in Hershey.

More than 1,700 students were nominated from more than 800 community colleges for the New Century Scholar award. The award recognizes students for academic prowess, leadership and activities, as well as for how the students extend their intellectual talents beyond the classroom into the community. Philipp also will be honored on April 23 at the American Association of Community Colleges’ Convention in Orlando, Florida.

In addition, Philipp has the distinction of being selected as one of only two students from Delaware County Community College to participate in the All-Pennsylvania Community College Academic Team. Sharing the spotlight with Philipp for the All-PA honor is student Lynda Lichti of Newtown Square.

The All-PA students also were honored at the Pennsylvania Commission for Community College’s dinner last night. The All-PA program recognizes the top community college students in the state. Students are eligible for a two-year scholarship to attend any of the 14 Pennsylvania State System of Higher Education universities.

“We are honored to have two students recognized not only for their academic success, but their contributions to the community,” said Jerome S. Parker, president of Delaware County Community College. “Nichole and Lynda represent what students can achieve at the College when they are ambitious, industrious, goal-oriented and community-minded.”

Philipp and Lichti are both members of the College’s chapter of Phi Theta Kappa (PTK), an international honor society that is the largest honor society in American higher education with 1,280 chapters on two-year and community college campuses. Philipp is president and has served as treasurer of the local PTK chapter. Lichti is secretary and has served on the public relations committee of the local PTK chapter.

Both women also are active in the College’s Student Government Association. Philipp is president and has served as treasurer. Lichti is secretary and is the student representative on the Academic Affairs committee.

Philipp, 21, is scheduled to graduate in May with an Associate Degree in Science. She is considering transferring to Villanova, Widener or Drexel universities, where she plans to major in biochemical engineering. She hopes to become a biochemical engineer and find a cure for cancer. While at Delaware County Community College, she has received many awards including a 2011 Engineering Department award, a PTK award for holding a 3.8 grade point average or higher while dedicating more than 20 hours of service to a PTK chapter, and a $1,000 College Foundation Natural Science Scholarship. Philipp also is active in her community. She recently helped to raise $5,000 for the Delco Cruisers Car Club’s “Salute the Troops” Car Show. She also has tutored high school students in math and science, and she has served as an assistant minister at her local church.

Lichti, 42, a mother of three teenagers who live at home and a 24-year-old son who lives on his own, will celebrate her 43rd birthday one week before graduating on May 17 with an Associate Degree in Behavioral Science and Psychology. She plans to transfer to West Chester University to pursue a Master’s Degree in Psychology. Her career goal is to work in higher education as a guidance counselor or career counselor. Lichti also is active in her community. She volunteers for the Adopt-A-Highway program, food drives and toy drives. She also organizes various fundraising events for her children’s sports and activities.

Photo Caption: From left: Student Lynda Lichti, President Jerome S. Parker and student Nichole Philipp at the Pennsylvania Commission for Community Colleges' award dinner on April 2 in Hershey, PA. Lichti and Philipp were both selected for the All-Pennsylvania Academic Team. Philipp also was honored as the 2012 Pennsylvania New Century Scholar.