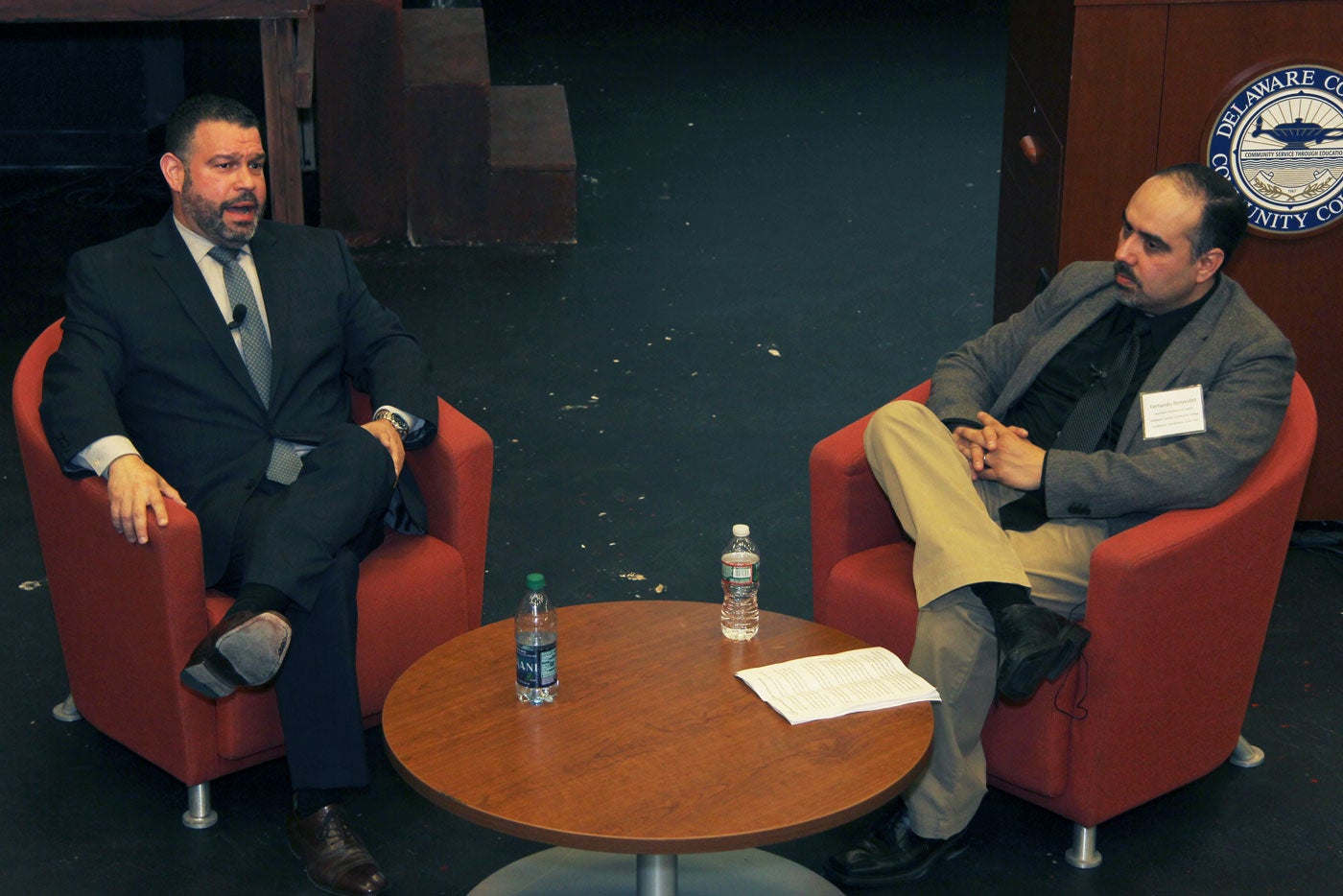 Pennsylvania Secretary of Education Pedro A. Rivera fields questions from audience members and from Assistant Professor of English Fernando Benavidez, a coordinator of Delaware County Community College's second annual Latino Conference, which was held today at the College's Marple Campus

(Delaware and Chester Counties, PA • April 15, 2016)—Before a standing-room-only audience at the College’s Marple Campus today, Pennsylvania Secretary of Education Pedro Rivera participated in a wide-ranging discussion about Latinos, education, and his own background growing up in a low-income neighborhood in North Philadelphia.

"My mother did not finish high school until I was in College," Rivera said. "She dropped out of high school to have me."

From humble beginnings, however, he said he was able to overcome many obstacles, from discrimination because of his Puerto Rican heritage to coming from a low-income neighborhood. He became a college graduate, a teacher, a school principal, a superintendent for Lancaster County, and eventually a member of Governor Wolf’s cabinet as the state’s Secretary of Education.

One of only 10 people nationally honored in 2014 by the White House as a Champion of Change for his efforts to transform urban education, Rivera was one of a multitude of speakers at the College’s second annual Latino Conference, “Beyond Multiculturalism: Empowering Latino Students and the Community.”

The conference featured panel discussions on issues such as immigration; the representation of Latinos in movies, television and news; inclusion; equity; and mentoring. Coordinated by the College’s faculty-led Latino Initiatives Outreach Network (LION) and the College’s student-led Latin Flavor Club, the free conference included a free lunch with ethnic foods.

A first-generation college graduate who earned a Bachelor of Science degree from The Pennsylvania State University and a Master's degree in Education Administration from Cheyney University, Rivera said he realized early in life that his calling was to be a teacher and to help people better their lives through education.

"I’ve been blessed to do what I love to do," he said, urging the students, many of whom were from high schools in Delaware and Chester counties, to find a career path they can be passionate about, to work hard, and to not be deterred by language barriers, discrimination, or other obstacles.

During one of the conference panel discussions, Dr. Elizabeth Conde-Frazier, the dean of Esperanza College, said that when she was growing up, a school advisor told her she would not help a Puerto Rican go to college. Undeterred, Conde-Frazier said she continued her educational pursuits and today is the head of a Philadelphia-based college collaborative with Eastern University that helps Latinos gain access to higher education.

"Smart is not something you are. Smart is something you become,” Conde-Frazier said, urging the students to never let anyone make them feel less than, intimidate them, or steal their dreams. “You have to have a vision for yourself."