67 Municipal Police Academy Graduates, Including 10 Female Cadets, the Most in the Academy’s History 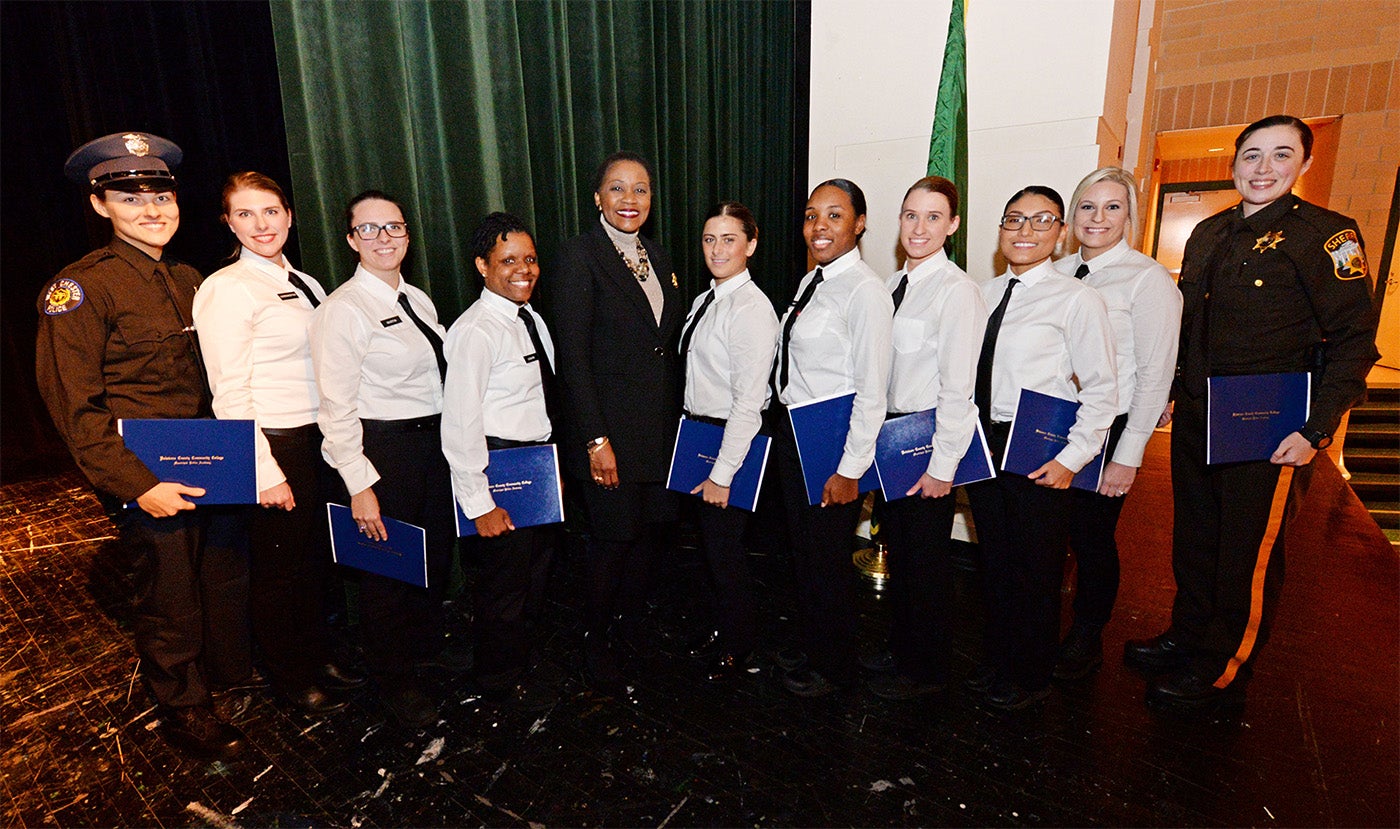 Dr. L. Joy Gates Black, a U.S. veteran and the first female president of the College, noted the momentous occasion. “Among you this evening are 10 women who have mastered the academics, physical conditioning, driving skills and firearms accuracy required to receive state municipal police officer certification,” Dr. Gates Black said. “As a woman, who served in the U.S. Air Force at a time when there were not as many opportunities for women, and as the first female president of Delaware County Community College, I appreciate and applaud this accomplishment.”

Guest speaker the Honorable Kevin F. Kelly, President Judge of the Court of Common Pleas, Delaware County, also praised the 67 graduates, in his remarks before their families and friends, as well as the many law enforcement dignitaries, College instructors and staff gathered for the occasion. William Davis, director of the Municipal Academy for the past 26 years, also complimented the graduating cadets.

A recognized leader in training law enforcement officers through rigorous academic courses and physical training programs, the Municipal Police Academy trains 95 percent of the police officers in Delaware County and 75 percent of the police officers in Chester County. Among its graduates are police chiefs, supervisors and other law enforcement personnel, such as Aldan Police Chief and Police Academy Instructor Kenneth Coppola, Trainer Police Chief Francis Priscopo, as well as Scott McAllister, deputy under-secretary for the U.S. Department of Homeland Security.

Also among the Police Academy’s alumni is Jesse Harnett, a former Philadelphia police officer who, despite having been seriously wounded in an ambush in Philadelphia, gave chase and helped apprehend the assailant. Last year, in recognition of his bravery, Hartnett received the “Man of the Year” award from the National Police Defense Foundation in New York.

Dr. Gates Black reminded the cadets of the Police Academy’s outstanding history. “Today, you will become part of a rich, 40-year history of Municipal Police Academy alumni who have utilized the knowledge and training they received here to go on to become police chiefs, supervisors and some of the top law enforcement personnel in the country,” Dr. Gates Black said. “You, like those who have graduated before you, represent the best of what Delaware County Community College has to offer in education and training.”

Photo Caption: Delaware County Community College President Dr. L. Joy Gates Black with the 10 female cadets who graduated Wednesday night from the College’s Municipal Police Academy. The 10 women are the most to have graduated at one time in the 40-year history of the Police Academy.