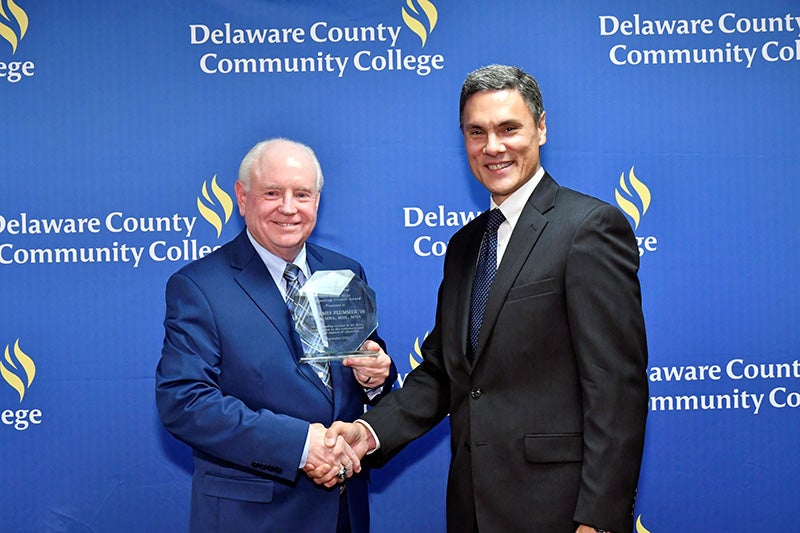 For nearly five decades, beginning with his role as a U.S. Army Medical Corpsman in 1973, Dr. Plummer has made it his mission to help others.

Following his tour with the Army, Dr. Plummer joined the U.S. Postal Service for a successful 25-year career. His retirement was short-lived, however, as he joined the U.S. Department of Homeland Security as a screening manager from 2002-2005. While the work was rewarding, Dr. Plummer felt he had unfinished business and decided to return to the classroom. He re-enrolled at Delaware County Community College to complete his Associate in Applied Science degree in 2006, then held several managerial roles with the American Red Cross, Exam One, Rosemont College, Penn Medicine, Crozer-Keystone Health System, Philadelphia University of Osteopathic Medicine, and Axia Women’s Health. Recently, he became the Administrator for Population Health with the newly created Delaware County Health Department.

Dr. Plummer likes to tell people never to stop learning. He earned a Bachelor of Arts degree in 2007 and a Master of Science-Healthcare Management degree in 2010, both from Rosemont College. He then attended the University of Pennsylvania Wharton School of Business for a Certificate of Leadership in 2012, followed by Eastern University’s Master of Business Administration-Health Care Administration program in 2015. His classwork continued towards concurrent studies in the Master of Science-Healthcare Law from the University of Oklahoma (virtually) and the Thomas Jefferson University Doctor of Management in Strategic Leadership programs, successfully graduating from both in 2020. Now, he is pursuing his fifth post-graduate degree, having enrolled in the Master of Science-Public Administration program at Villanova University. He also is an adjunct faculty member for the College of Business and Leadership at Eastern University.

Dr. Plummer proudly serves on the Board of Directors for the Penn Foundation and the Delaware County Medical Society. He also volunteers as a fellow with the Thomas Jefferson University Institute of System Wisdoms, the Delta Mu Delta Honor Society at Eastern University, and as a mentor with the Delaware County

Community College Alumni Association. Last December, he was named an Outstanding Alumni for his studies and service at Eastern University.

Delaware County Community College’s Wong Moss award was created by the late Barbara Wong Moss, a former trustee, and her son, John Moss, in honor of Barbara’s father, an immigrant from China who believed in the value of education. To qualify, award nominees must have successfully completed at least 30 academic credits at the College and exhibited service to others and the community in which they live and work.