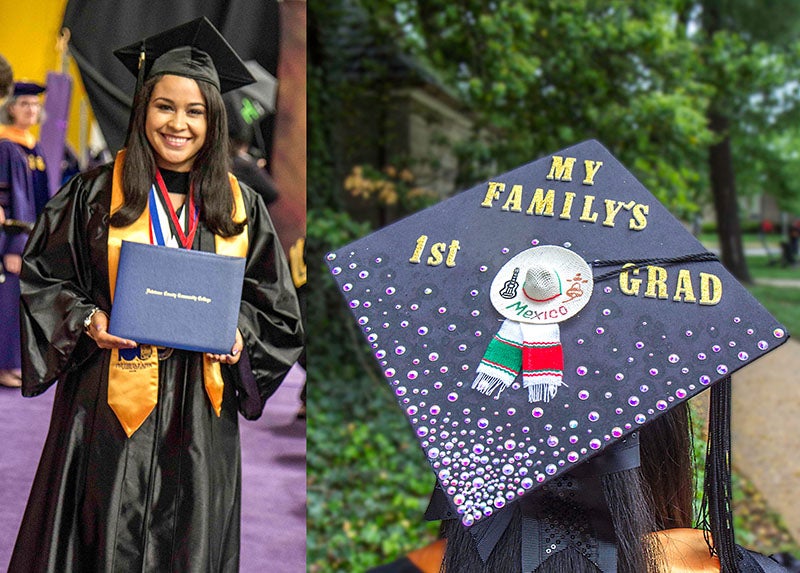 (Delaware and Chester Counties, PA • August 13, 2018)—When Yesenia Diaz Lopez graduated in May, she wore two hats: her commencement cap and, atop that, a small sombrero. The sombrero was emblazoned with the name of her home country of Mexico. Her graduation cap was decorated with the words “My Family’s 1st Grad.”

The tradition of cap decorating allows graduates to share a piece of their story—be it the rewards or challenges that they have encountered along their journey to commencement. Diaz wanted her cap to pay homage to her native Mexico and how far she has come. Her path to becoming her family’s first college graduate took four years, some obstacles and a significant amount of hard work.

Diaz grew up in Santa Gertrudis, Moroleon, Guanajuato, Mexico, and came to the United States at the age of 17. Though it was difficult to leave her grandmother, cousins and friends behind, she was eager to attend an American school and learn English. Plus, her mother and other family members were already living in the United States and she hadn’t seen them in a long time. She was excited to start her new life.

Shortly after arriving in Pennsylvania, Diaz graduated from high school and was anxious to begin college, but she faced a myriad of challenges common to first-generation and English as a Second Language (ESL) students. “When I graduated from high school, I did not know anything about higher education. This new experience became especially difficult when I had to complete financial aid forms,” she says. “My family expected me to know everything and to explain it to them. As the only person in my house who spoke English (or at least the one who knew it a little bit better), I had the added responsibility of helping translate things that I myself was just learning.”

Though it was stressful to navigate the financial aid process while facing a language barrier, Diaz and her family worked through it, and she began taking classes at Delaware County Community College in 2013. She started out with ESL courses to improve her English, and she worked two part-time jobs to help pay tuition and support her family.

In 2016, after a brief break due to an out-of-state move, Diaz returned to Delaware County Community College more confident and engaged. She enrolled as a Business Administration major and got involved on campus. With the encouragement of Dr. Kendrick Mickens, Director of First Year Experiences, Diaz resurrected the Latinx Student Association as a way of sharing her culture with her classmates and creating a home away from home for her fellow Latinx students. She also joined the Student Government Association, Phi Theta Kappa Honor Society and the Student Business Society.

“By getting involved, I was able to enhance my interpersonal, leadership and communication skills and increase my network,” she says. “I was also able to make great connections with my professors.”

Diaz has had such great success that she makes it look almost effortless. In addition to maintaining an active role on campus, she earned a 4.0 GPA and served as a peer mentor and student success ambassador, helping her classmates transition into college. She also was selected as a 2018 All-Pennsylvania student, for which she received a free-tuition scholarship to West Chester University, where she is currently studying business management.

“What I love the most about the United States is that almost everybody has a chance to succeed in this country,” she says. “Being a first-generation student is very challenging, but it also empowers you and gives you inner strength. We have the drive and determination to set the example for future generations. We want to honor our families, and we want to achieve a goal that nobody in our family has achieved yet.”

Diaz has plenty more firsts in store. After finishing her bachelor’s degree at West Chester University, she plans to pursue a master’s degree in business. Then, she hopes to work in higher education, helping first-generation college students just like herself.