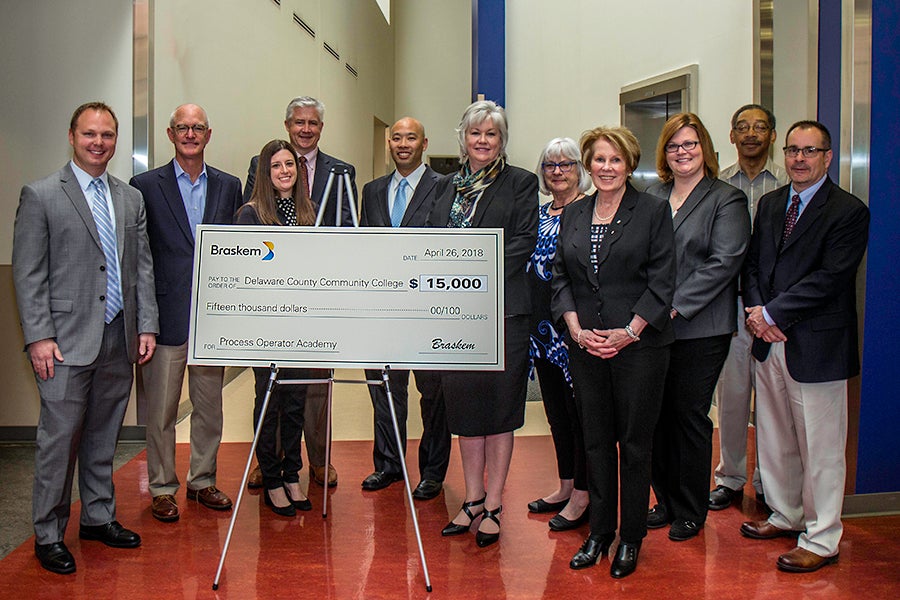 Braskem America provided $15,000 to the College’s Educational Foundation to help develop and fund the Process Operator Academy. Both Braskem and Eastern Controls also helped the College create the curriculum for the new training program, which has already begun and is held at the College’s Advanced Technology Center at the Marple Campus and at Eastern Controls, based in Edgmont Township. Eastern Controls manufactures and distributes process control and instrumentation equipment. Headquartered in Brazil, Braskem produces thermoplastics and operates locally out of Marcus Hook.

Over the past decade, chemical and other industries have experienced a decline in the talent pool of skilled workers to fill high-demand jobs in large part because of the retirement of many baby-boomer generation workers. However, building a training program to support industry and replenish the skilled labor pool is no easy task and takes time, money and resources.

At the announcement today, Jeffrey Logan, executive director of the Pennsylvania Chemical Industry Council, said the Process Operator Academy can help manufacturers counter the “great tsunami” of baby-boomer retirements affecting many industries by providing affordable, effective, quality training. “These types of partnerships are critical to replacing the skill sets that will be moving on,” Logan said. “We’re hoping to see this (training program) replicated across the state.”

According to Jeremy Glisson, industrial director for Braskem America, it typically takes Braskem three to five years to fully train a process operator. However, Braskem expects the Process Operator Academy will cut that training time in half, and plans to send four of its employees to the Academy for training later this month.

“We actually have a world class training facility right here in our own backyard,” Glisson said. “Thank you to Delaware County Community College.” Cliff McLaughlin Jr., president of Eastern Controls, said as the nation’s economy improves, manufacturing in America is growing, but employers are facing critical labor shortages. “Recruit, train and retain skilled workers that is a real issue” for area employers, McLaughlin Jr. said.

The median salary for a process operator is $28.33 per hour, according the Pennsylvania Department of Labor and Industry. To learn more about the College’s new Process Operator Academy, call 610-359-5137.

Photo Caption: Industry representatives from Braskem America, Eastern Controls and the Pennsylvania Chemical Industry Council join administrators and faculty from Delaware County Community College for the announcement of the College’s new Process Operator Academy. Braskem donated $15,000 to the College’s Educational Foundation for the creation of the Academy.