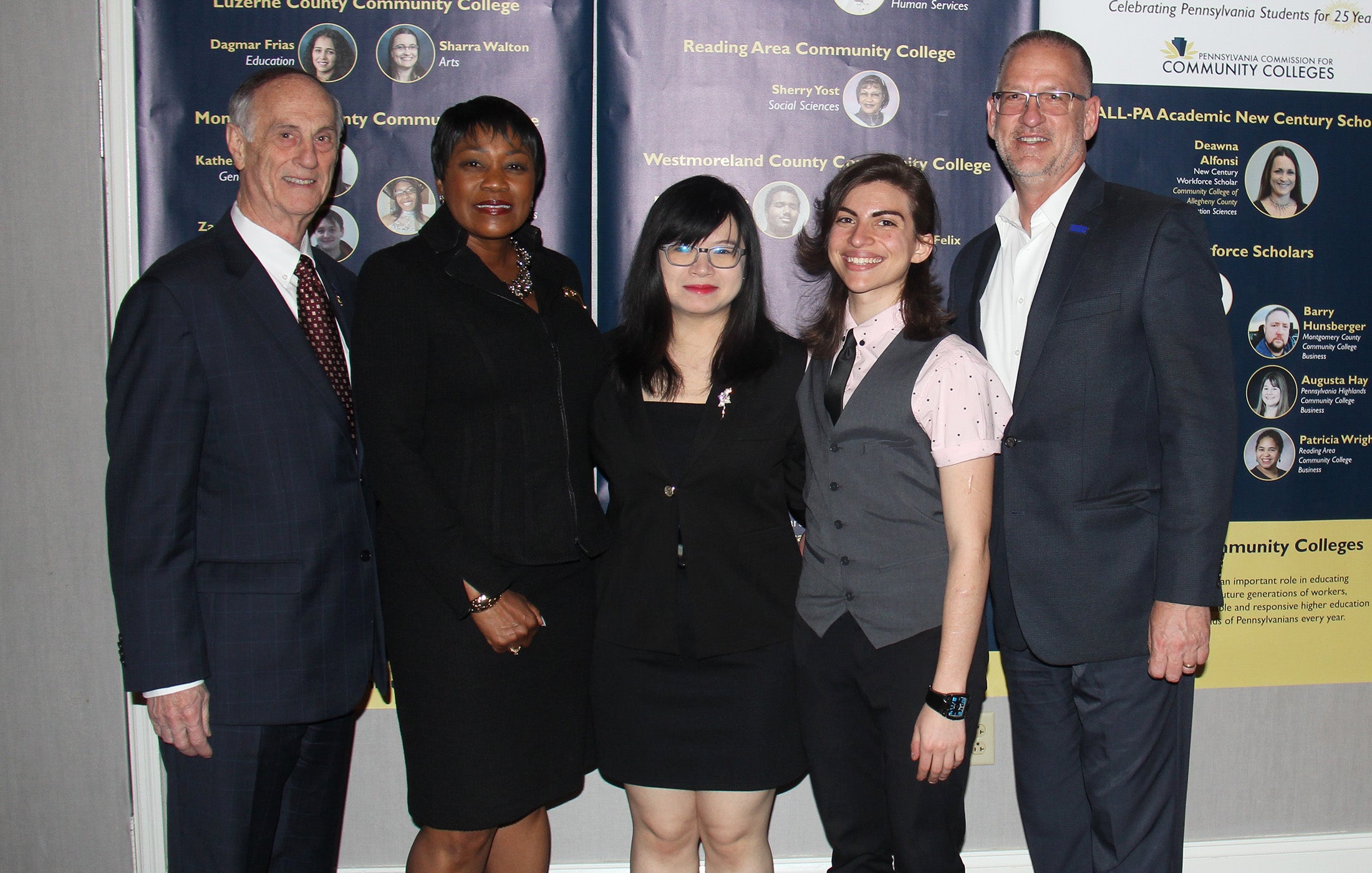 Mirra and Thant were among 47 transfer scholars and eight workforce scholars from Pennsylvania’s 14 community colleges honored on April 8 at the Pennsylvania Commission for Community Colleges’ Annual Awards & Recognition Dinner at the Hilton Harrisburg hotel.

“Em Mirra and Zun Phyu Thant are shining examples of the high caliber of students at the College,” said Dr. L. Joy Gates Black, president of Delaware County Community College. “The College looks forward to the significant impact we anticipate Em and Zun will have in each of their chosen career fields.”

Scholars are named by their colleges to the All-Pennsylvania Academic Team, which requires students maintain at least a 3.5 grade point average (GPA), have completed at least 36 credits, and be about to graduate with an associate degree. Workforce students must have a minimum of 12 college-level credit hours at a community college and a cumulative GPA of 3.5 or higher.

All-Pennsylvania scholars are eligible to receive a full-tuition scholarship for up to two years at one of the 14 universities in the Pennsylvania State System of Higher Education (PASSHE). Both Mirra and Thant plan to attend PASSHE universities.

Mirra, a graphic design major who plans to attend Kutztown University’s Communication Design Bachelor of Fine Arts program, hopes to one day work for the United Nation’s Graphic Design Unit. “By working in-house for the United Nations, I can help design for awareness campaigns on topics of global concern,” Mirra said.

Mirra has the additional distinction of being one of only five students statewide named a Coca-Cola Silver Scholar, which comes with an additional $1,250 scholarship. Nationally, Mirra, who identifies as transgender non-binary and uses they/them pronouns, was one of just 50 scholars selected from more than 2,000 students considered for the coveted Coca-Cola Silver Scholar award, a program sponsored by the Coca-Cola Scholars Foundation and administered by Phi Theta Kappa. Mirra also was recognized earlier this month at PTK Catalyst, Phi Theta Kappa’s annual convention, which was held this year in Orlando, Florida.

Thant, an engineering major and native of Myanmar in Southeast Asia, plans to attend West Chester University. She hopes to one day work as an engineer for Exelon Corporation, or at PJM Interconnection LLC, a regional

transmission organization that coordinates the movement of wholesale electricity in 13 states and the District of Columbia. “Since I was young, I was always inspired by Thomas Alva Edison. The reason is because in my country, electricity is supplied only six hours a day, and even then power outages occur during those six-hour periods,” Thant said. “Therefore, I always have dreamed of being the engineer who can provide electricity at all times to all people, reliably and economically.”

Having met at the College and become close friends, Mirra, who also is president of the Art and Design Club, and Thant have worked together on school and community-centered projects. They also are co-presidents of the College’s Phi Theta Kappa Alpha Tau Epsilon chapter.

Mirra, who also serves as the College’s representative on the Barnes Foundation’s Campus Outreach Council promoting the Philadelphia-based foundation’s art, horticultural and educational exhibits and programs, was the driving force behind the College’s “Cubes of Culture” collaborative art project. The project, which seeks to celebrate ethnic heritage and foster cultural exchange among students while dispelling hateful stereotypes, allows students to represent their countries of origin with cubic international flags, as well as with hanging posters that contain cultural profiles of the students. “While the installation serves to attract hallway patrons, the posters’ real-life narratives of Delaware County Community College students enlighten viewers on the experience of belonging to another culture,” Mirra said.

As PTK co-president, Thant also collaborated on the Cubes of Culture project, advertising in the College newspaper and inviting students to participate through the College website, student club fairs, the annual Multicultural Festival and other activities. Thant says that the project is rewarding because it gives students an opportunity to proudly showcase their culture, and it allows visitors to gain knowledge and an interest in diversity. “I am very grateful to PTK for giving me such an endeavor to express my culture as a minority, and to encourage society with acceptance to diversity and inclusion,” Thant said.